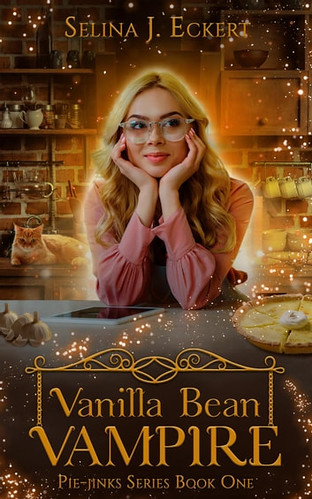 Blurb:
Welcome to Cider Hollow, where the pies are magic and the people are disappearing.

Pie witch Reese is living her dream: running the bakery she’s always wanted, selling magical pies, and landing a date with handsome Prince Forrest of the Autumn Court. But then people around her start vanishing, returning hours or days later with no memory of their missing time.

When her delivery boy is the next victim, Reese sets aside her pies, determined to get to the bottom of the mystery. But her prince is just as determined to keep her out of harm’s way, keeping her in the dark and even pushing her out of his own investigation.

Then the disappearances accelerate, hitting closer to home and leaving her with little choice but to get involved.

Can Reese bake up a plan to save the town? Or will she be the next to disappear?

Vanilla Bean Vampire is the first in the Pie-Jinks series, a new contemporary fantasy that is perfect for fans of Gilmore Girls and Mercy Thompson. If you like light, small-town stories, whimsical magic, and a touch of both romance and high-stakes mystery, you will love Selina J. Eckert’s new book!

This book takes place after the events of Pumpkin Spice Pie-Jinks in the Seasons of Magic: Pumpkins & Shades series, but Vanilla Bean Vampire can be read as a standalone. You do not need to read the novella to enjoy this series.

After reading the Prequel Pumpkin Spice Pie-Jinks I dived right into the first book in the series. Vanilla Bean Vampire was a great read, I liked reading more about Reese and following her as she runs her bakery and gets involved in solving the mystery of people who disappear. I thinks it’s important to read the prequel first as that establishes a lot of the setting and characters and even how the couple meets.

Reese is still working hard at her bakery and I liked reading about her business and baking pies. The magical element is a nice touch too. The two sprites are friends now and her friend Maple is present as well. She’s starting to date Forest the fae prince who is trying to establish a court next to town. It’s a fun read with an autumn theme, plenty of pies and magic as well as a bit of mystery.

The mystery plot line about the disappearing villagers is a bit slow to start with more focus on Reese and her business at first. When Luke, Reese’s delivery boy disappears the mystery takes a bigger role as Reese gets involved. I like how Reese wanted to help and figure out what was happening. I was not a fan of how Forrest kept pushing her away and hiding things for her even though he had a point it was dangerous, I rather he was more open about everything so she understood better, but they are still in the beginning stages of their romance. I liked how the mystery plot line got resolved and the way the hints all coalesced into a whole. It all made sense and I liked the conclusion to it.

I like reading about Reese and her bakery, she’s a nice main character. It could be a bit stressful to read about her bakery as she runs into some problems and she works really hard and still struggles when orders start to pile up before she implements some things to get on top of things. I liked seeing how she handled things and it felt realistic. The pie witch thing is cool and especially some pies she baked late in the book were interesting additions as well as a scene where we see how she makes her potions.

I had a few minor things that didn’t quite work for me. Like how Reese was a bit too hard on herself at times and even Maple agreeing she was a bad friend. I thought it made sense how Reese had focused on the bakery for a while now as this was her lifelong dream and it bothered me that Maple blamed Reese for not asking when she also could’ve told Reese what was going on. I never fully warmed up to their friendship, but it was clear they cared for one another.

The romance is mostly a side plot line and didn’t really progress much till later in the book. I liked how Reese and Forrest have an instant connection, but I want to see them actually spending time with each other and getting to know each other. Reese really feels it’s serious and how Forrest really sees her, but they hardly spend any time together and I didn’t really feel that depth of feelings yet. I hope in the next book we see more of them together. I understood why Forest kept her at arms length and was vague about what was going on, but I hope after what happened in this book he decides to not do that going forward.

To summarize: Vanilla Bean Vampire is a fun and cozy fantasy read set during autumn. I enjoyed reading this one. Reese is a nice main character and I like reading about her bakery and her pies, the whole pie witch thing is fun to read about. The mystery plot line is a bit slow to start, but ramps up later when Reese her delivery boy goes missing and she tries to figure out what’s going on. I liked how everything ties together and all the hints play a role in the conclusion. I would’ve liked to see more of the romance, as the two don’t spend a lot of time together in this book. It made sense why Forest didn’t want Reese involved, but I wished he had trusted her more and explained more. I look forward to the next book.