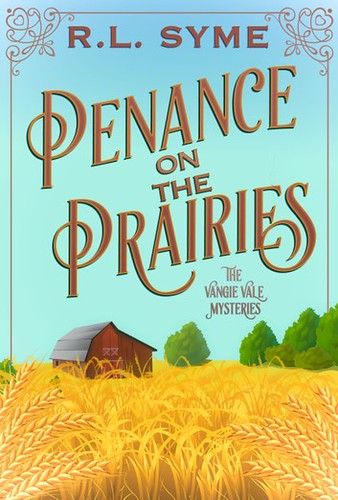 Penance on the Prairies (The Vangie Vale Mysteries #1)
by R.L. Syme

Between the police scanners, the coffee ladies, and the senior center, no secret is safe for long. But Vangie Vale wants nothing more than to stay under the radar…especially the police radar.

So when her new bakery is linked to a murder investigation, nothing will stop the gossip mill from connecting her to the dead body. Can’t have that.

In order to clear her good name and keep her face off the front page, this bakery owner becomes extra nosy…with a little side of breaking-and-entering. But when she comes face-to-face with the Sheriff, Vangie can’t ignore the fact that one of her macarons was involved in a murder. She has to find the real murderer.

The Murdered Macaron is book one in The Matchbaker Mysteries, a new cozy culinary mystery series from USA Today Bestselling Author, R.L. Syme.

After reading the non-fiction books by the other pen name of this author I knew I had to give her cozy mysteries a try too and I am so glad I did. This book was fabulous. This is one of the best cozies I’ve read. The mystery was so well done with plenty of twists reveals, secrets and lies as well as plenty of hints. The characters all felt so realistic and well done and I really liked following Vangie Vale around as she tried to solve this mystery. I also liked how this one had a clear cozie vibe, but at the same time also felt unique and fresh in the way it was handled, although I can’t quite put my finger on how the author managed that.

Let’s start with the mystery. I really liked the mystery in this book. The set-up was a little bit different, with the main character not being the one to discover the body, but she is sort of connected as a box of macarons from her bakery were found on the body and two possible suspects were in the town the murdered person was found because she send them there. She also got to know one of the suspects and believes he’s innocent. She wants justice served and so she gets involved. It made sense and I liked how a lot of the investigating was her asking questions and it didn’t feel forced even thought she was totally trying to solve the mystery.

This mystery had so many twists and turns. There are so many secrets and slowly they come to light one by one. So many lies as well and it was hard weeding through everything and figuring out what really happened. I like how the author kept the mystery going forward, with plenty of clues along the way that helped form a better picture, but at the same time you really don’t get the full picture until the end. It was a very satisfying way of progressing through the mystery. I also liked how the mystery went in some directions I hadn’t expected, there were some great twists. The mystery kept me guessing and I spent some time trying to figure out what was going on and who the murderer was. I managed to guess the killer right and was pretty pleased about that, but there was one person who was involved and I just couldn’t figure out how that person tied into it until the end. It was great when everything came to light.

Vangie Vale was such a great main character. I like how realistic and multi faceted she felt. She was a good person, but she also does things she isn’t proud of. She is a bakery owner, but also a pastor, which actually was quite interesting to read about. I felt like we really got a good feel for her personality. With how she could read people, but also how she could be wrong. How she felt when things happened and her fear when she was in a dangerous situation. There is a bit of what happened in her past that we don’t get all the details about, but that worked well here and I assume we get more information about that as the series progresses. I also would like to see both more about her job as a pastor and bakery owner, as while both were definitely a part of the book she wasn’t workign as much as I had expected.

There is a great group of side characters as well and they all feel realistic and have multiple sides just like Vangie. There are quite some characters involved into the mystery, but it didn’t feel like too much and I never had trouble remembering who was who, except for a few times a character we hadn’t seen a lot of suddenly popped up again. The only one who I didn’t get as good of a feel for as I would’ve liked is Emma, who is a good friend of Vangie, but I never really felt their friendship. I liked how Leo felt like a younger brother to Vangie and how she interacted with him. I also liked seeing how Vangie interacts with Henry who she finds attractive, the Sheriff with whom she keeps butting heads constantly and Derek who turns out to be more than he seems at first. I feel like there might be a hint of a possible romance with a few of those, but I am not quite sure yet how and if that will develop. I also liked how some characters start out one way, but when you learn more about them it paints a fuller picture and they seem different than what I expected at first.

The small town setting in a fictional town in Montana also was well done. It had that small town vibe and I liked getting to see a bit of the town and the inhabitants in this book.

To summarize: This was an amazing start to this cozy mystery series. The mystery was a really good one. It kept me guessing and there were some many twists and turns. I liked how there were plenty of clues and hints along the way, so it felt like the mystery kept progressing while you still don’t get the full picture till the end. I managed to guess who the murderer was correctly, but wasn’t sure about some other details. I liked main character Vangie Vale, she felt so realistic and multi faceted. She’s a good person, but also makes mistakes. She wants justice to be served and gets herself involved in this mystery. I really liked her and feel like we got a good feel for her personality. I also liked the side characters, many of whom feel just as real and have multiple sides just like Vangie does. I like how some characters turned out to be different than what they seemed at first. I really look forward to reading the next book in this series!

4 responses to “Review: Penance on the Prairies by R.L. Syme”