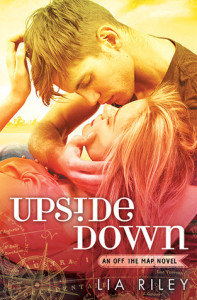 Upside Down (Off the Map #1)
by Lia Riley

If You Never Get Lost, You’ll Never Be Found

Twenty-one-year-old Natalia Stolfi is saying good-bye to the past-and turning her life upside down with a trip to the land down under. For the next six months, she’ll act like a carefree exchange student, not a girl sinking under the weight of painful memories. Everything is going according to plan until she meets a brooding surfer with hypnotic green eyes and the troubling ability to see straight through her act.

Bran Lockhart is having the worst year on record. After the girl of his dreams turned into a nightmare, he moved back home to Melbourne to piece his life together. Yet no amount of disappointment could blind him to the pretty California girl who gets past all his defenses. He’s never wanted anyone the way he wants Talia. But when Bran gets a stark reminder of why he stopped believing in love, he and Talia must decide if what they have is once in a lifetime . . . or if they were meant to live a world apart.

As soon as I participated in a book blitz for this book I knew I wanted to read it. It had a great cover, nice setting (Australia), characters who sounded real and romance. And I still don’t know where it went wrong between this book and me.

I really enjoyed the first chapter and from then onwards it became a struggle. I liked the main character at first and how she was struggling with her OCD, it made her feel real and as I studied psychology I always find it interesting to see how things like that are portrayed in a book. Then in the second chapter, she suddenly was in Australia already, meeting a guy and the romance part was introduced. And I don’t know why, but the story just failed to hook me. There where no epic adventures in Australia, learning to culture or the traditions. It was just your average New Adult book, with a romance, heaps of drama and lots of secrets.

Talia goes to Australia to escape and trying to turn her life upside down, well she actually manages to do that, fall in love and lands in some drama. I liked Talia at first, she felt real and she was struggling through life. Then eventually I just kinda lost interest, her OCD seemed to solve itself a bit too easily, while I would’ve liked to see more from it and there just wasn’t anything to keep me interested in her. She didn’t feel like a real person and I had a hard time figuring out who she was and what she liked doing. It was only till halfway through the book that I finally figured what she studied.

Then there was Bran, the love interest, since the moment we met him I just couldn’t connect with him. I didn’t care about him, he came across as someone I wouldn’t like in real life and I didn’t like him in a book either. He was sleeping with lost of girl to get over something, hiding all his secrets, being nice one moment and then not-so-nice the next moment. He did nice things, but then refused to let Talia in. Actually I thought it was a wonder Talia stuck with him for so long. There where some chapters from his point of view and they actually made me like him even less.
The romance didn’t work for me, I just didn’t feel it.

The the side characters, well let’s say they stayed to the side mostly. Talia had tow friends back home, which she wouldn’t contact for her trip in Australia because one of her friend decided that would ruin the trip, uhm yeah, nice way to get those two out of the picture. Then there was a room mate/friend person that played a part in the first few chapters and then we didn’t saw almost anything from her the rest of the book. Beside those there where the parents from Talia and Bran’s uncle, an Australian friend and that’s about it.

To conclude: while this book has some nice elements, it just fell flat for me. I struggled to get through it and at the end concluded it wasn’t worth it. The story didn’t keep me interest, the character where flat, the side characters stayed to the side, the romance didn’t work for me, I didn’t care about the main characters and I didn’t get a feel for the country they stayed in. I am not sure if it’s me or the book, but it just didn’t work for me. I think I need a break from this genre for a bit.

4 responses to “Review: Upside Down by Lia Riley”