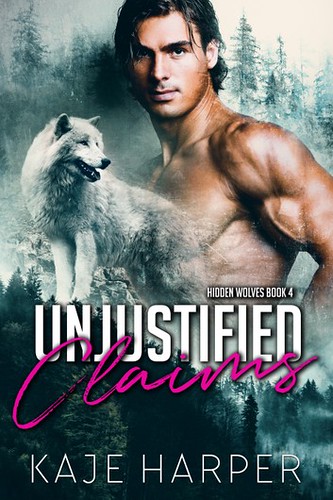 Blurb:
His pack would’ve killed him for his kinks and desires, but his human lover might destroy his wolf.

Ethan Sjulstad knows life is making him crazy when a solo hike into the Minnesota Boundary Waters seems reasonable. Then a bad fall leaves him seriously hurt and facing death. Delirious, he hallucinates being rescued by a big gray wolf and a naked woodland godling. For a man who has always loved fantasy, it’s worth surviving just to find out what the hell is going on.

Unjustified Claims is the fourth book in the Hidden Wolves series. I’ve been really enjoying this series and eager for the next book. I was curious to see who the main characters of this book would be and to continue the series. This was another great read with a slow burn romance, great characters and a solid tie in with the rest of the series later in the book.

Unjustified Claims takes at the start some distance from the pack we’ve grown to know in the previous books. Instead we follow the story of Brandt who ran away from his pack when they discover he’s bisexual. Brandt stumbles upon a hurt human and instead of moving on, he decides to help him. That’s how Ethan and Brandt meet. The first bit of the book mostly focuses on Brandt and Ethan meeting and slowly growing closer. There also is some prejudice Ethan faces for being gay. While later in the book the focus switches to the more paranormal and Brandt’s secret of being a werewolf. At first I was wondering where the pack from the first three books would come in, but it all makes sense later on and I like the way it ties these two characters in with the pack.

I liked Ethan and Brandt. They both have their own struggles and issues to overcome. They have some scars from their past and it was great to see them slowly work through it. Brandt also has a kink he finds shameful and slowly he realizes it’s okay to be that way and like what he likes. I really liked seeing these two grow closer and it has a nice slow burn romance. These books are a good length, so it really feels like there’s plenty of time to get to feel the romance between the two characters. These two were great together. I liked how these two are very supportive of each other and get out the best in the other.

I was a bit bothered by how long Brandt kept his werewolf status a secret. I kept waiting for it to come out and then later in the book when I thought things would come to the surface it took even longer. It felt sad how this secret kept staying between them and kept creating a bit of distance, but on the other hand I liked how they really fell in love before it came to light. I liked seeing how Ethan and Brandt dealt with it once it was revealed that Brandt was a werewolf.

Later in the book we get to see some recurring characters from previous books. I just love how this series handles that. The focus is on this book’s couple, but we see the couples from previous books and even see some big milestones and see how they’re doing now. I really like this, how their relationship continues in later books even when they’re no longer the focus couple. It was a lot of fun to see Simon and Paul as well as Aaron and Zach again and this time from Brandt and Ethan’s point of view. I also like the werewolf part of this plot, there are some interesting developments and I am really looking forward to the next book.

To summarize: This was another great read in this series. It has a nice slow burn romance as well as paranormal elements. The focus is on the romance first and then slowly more of the paranormal gets woven into. The main couple gets most of the focus and later on we get to see the couples from previous books as well. I like the romance in this book, Ethan and Brandt are a great couple. I love how supportive they are of the other and how they have each other’s back. The paranormal aspect is great too and I enjoy reading about these werewolves and seeing how they handle things. The events at the end of this one make me very curious for the next book!