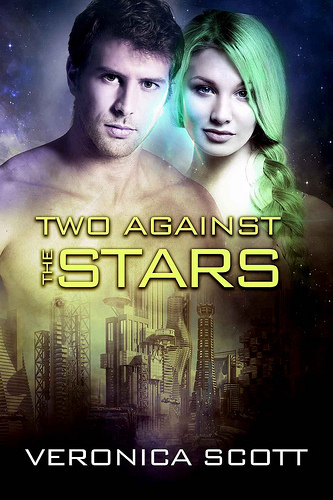 Two Against the Stars (The Sectors)
by Veronica Scott

Blurb:
Empathic priestess Carialle has escaped the evil Amarotu Combine, but she’s hardly out of danger. Not when she risks everything to rescue a drugged man from a crooked veterans’ clinic. By lulling the clinic staff to sleep, she reveals her powers. And once again, criminals are after her and her rescuer.

Marcus Valerian, a wounded Special Forces veteran, never expected to have his life threatened by the clinic that’s supposed to help ex-soldiers like him. But when he wakes from a drugged state to find a lovely woman urging him to run–he does. In his family’s remote fishing cabin, he suffers the agony of withdrawal, soothed only by her powers.

In their idyllic hideaway, the two also discover a nova-hot attraction flaring. But can they stay alive long enough for it to become more? Not if the Combine has anything to say–they are not giving up until Marcus is dead and Carialle is their tool.

I was in the mood for a science fiction romance book and always enjoy Veronica Scott’s stories, so I decided to pick this up. This was another solid read. This story follows another empathic priestess who got captured from her home world and is now enslaved. It loosely ties into the other stories about the empath characters, but can easily be read as a standalone as none of those characters actually get shown in this book, only briefly mentioned.

Two Against the Stars is told from the point of view of Carialle, together with her handler she lands on a world, but is able to escape shortly thereafter. The story slows down a bit after that as she finds a for now safe place to stay, but when she risks everything to save a drugged patient from the clinic she works at, they both have to go on the run from the clinic staff and the combine that used to enslave her. After that the pace is well done and there’s plenty of action and tense situations as well as some quieter moments in which the romance developed.

I liked reading about Carialle and the way she handled everything, she still felt a bit naive and in over her head even though everything she endured, but she also didn’t hesitate to use her powers to free Marcus and then make sure she and Marcus stayed safe. Marcus is a special forces veteran and has enough knowledge and abilities to defend the two of them. I liked seeing how the two of them bonded and grew close and how they eventually managed to find a solution to dealing with those who were after them. The ending wrapped everything up and promises a good future for the two of them, I would’ve loved to see an epilogue about how they’re doing next, but the ending was a satisfying conclusion.

To summarize: I picked this one up when I was in the mood for a science fiction romance book and this one perfectly fit my mood. I liked reading about Carialle and how she escaped from slavery and then rescued Marcus. They go on the run and grow closer. There is plenty of action and tense situations as well as moments where the romance developed and their bond deepens. I really enjoyed this and it had a satisfying ending.

4 responses to “Review: Two Against the Stars by Veronica Scott”