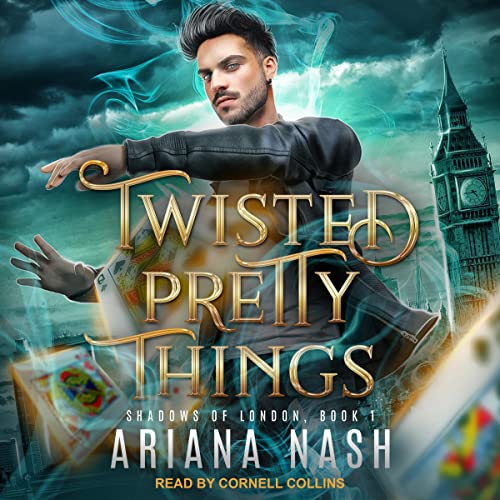 Blurb:
Something wicked is moving in the shadows of London…

In the underground world of glitzy illegal auctions, fast cars, and stolen magical artifacts, John “Dom” Domenici knows he’s out of his depth. But he needs the job at Kempthorne & Co like he needs to breathe. The alternative—going back to the organized crime gangs of London’s East End—is unthinkable.

So when Alexander Kempthorne, boss of Kempthorne & Co Artifact Retrieval Agency, wants him on a special case to track down an illegal artifact dealer, Dom can’t say no.

The only thing that really matters to Dom is solving the case and finding the artifact dealer. Because there are worse things in London than a conflicted billionaire and a trigger-happy American. Something wicked is stalking London’s streets, and if Dom doesn’t stop it, its shadows will rise and consume them all.

I received a free audio copy from Tantor Audio and voluntarily reviewed it.

I am glad I got to listen to this book. It had an interesting story and I enjoyed listening to this book. I had tried one of Ariana Nash’ books before and that one was too dark for me, after carefully scrolling through the reviews for this one I found out this one wasn’t as dark and decided to give it a try. The reviews were right and this one wasn’t as dark as the other one I read and I enjoyed the read.

Twisted Pretty Things follows the point of view of Dom who is an authenticater in London. He authenticates artifacts. He also is a latent, which are sort of the magic users in this book and artifacts can give them more power, but are also dangerous. I thought the unique world building was interesting and the plot starts off strong and continues that way. I kept wanting to listen more and see where the story goes. The pace is well done and I like how every chapter advances either the plot or characters. There are plenty of twists and turns and some pretty big reveals late in the book. I liked seeing how the story developed and the ending makes me look forward to the next book.

I liked Dom as main character, he is a good guy, but has a bit of a troubled past. I like how he finally has found his place a bit at Kempthorne & Co where he works. I like how he does his best to be good, but also feels like a real character with his own scars and troubles and a bit of a dark past. The other characters like Kempthorne and Cage have that same feel with having some dark things in their past, but trying to do the right thing.

There is a bit of romance with Cage or Hollywood as Dom calls him. It seems to be mostly mutual attraction at first, but I liked how it turns into something softer and deeper along the way, which I liked. Not quite sure where it will go next. As there is also a hint of something between Dom and his boss Kempthorne, although luckily it doesn’t feel like a love triangle yet.

I thought the world building felt fresh with the whole concept of latents and artifacts. We slowly learn more of the world and it feels real, although I still have questions about how the world works and how latents came to be. I think those are all things that will be addressed in future books and I look forward to learning more.

I enjoyed listening to this one. I liked the narrator’s style and the way he did the different voices. He did the British accent well and it fit the story. It did took me a bit of time to get used to his narration mostly due to the accent, but after a few chapters it went a lot better. I liked how he sometimes spoke softer or louder to give more feel to a scene, but it did make it hard to hear some of the softer words at times.

To summarize: I am glad I picked this one up. The story gripped me from the start and kept my attention throughout the book. It’s an interesting plot involving artifacts getting bought up and plans that slowly play out. There are twists and turns and some great reveals along the way. The plot feels fast paced and has plenty of action as well. Dom was a likable character and I like how he feels real. He tries to be a good guy and I liked following him around. There is a bit of romance as well with Cage/ Hollywood. As well as a hint of a connection with his boss Kempthorne. I liked the unique feel of the world with the artifacts and latents who have a sort of magic power. I look forward to learning more about the world in future books. I enjoyed listening to this one, I liked the narrators style and the way he did the different voices. He really brought the book alive, although it took me a few chapters to get used to his voice. I look forward to book 2!