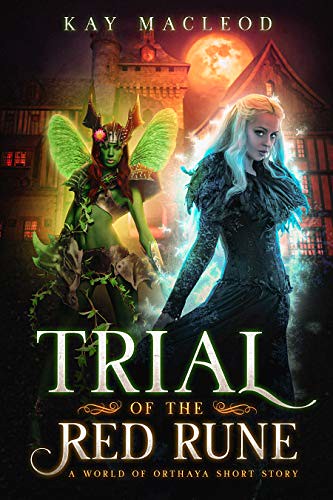 Blurb:
What could be powerful enough to abduct five mages?

Make that six when frost mage Maeve recovers from an explosion to find her leader snatched away by a teleportation spell.

As part of the Peace Keeper order, along with Lilley, a flora fairy, she’s sworn to hunt down anyone that abuses their magical abilities. And remove the threat where necessary.

Beneath the depths of the city, something dark is stirring. An ancient ritual set in motion to transform a disillusioned kidnapper into an unstoppable legendary being. One capable of seizing the kingdom that dared to suggest those without power were his equals.

Can Maeve prevent his ascent to immortality? Even if she does, she’ll have to live with the cost…

The World of Orthaya books are all standalone stories you can read in any order. Trial of the Red Rune is a 7,000 word short story featuring the Peace Keepers.

Trial of the Red Rune is a short story set into a new world. After reading The Carnelian Fox by this author I was looking forward to giving her fantasy books a try as well. This series is quite different from her Maiyamon series, but it was a good read and I definitely saw some similarities as well.

Trial of the Red Rune follows the point of view of a mage called Maeve who has an ice affinity. She and her team are investigating the disappearance of five mages and now their leader is also gone. Together with Lilley, a flora fairy, she rushes into danger. This story was quite the short read, I hardly had time to get into the story and by then it seemed it was over already. There’s a bit of setting the stage when Meave comes to from a knock on her head and then she and Lilley rush into a dangerous battle. And then there is some aftermath and wrap up. It was well done how it still has a build-up, middle and end given the short length.

I enjoyed the story, but it was a bit too short to really get a good feel for everything or to really get into the story. I think the author did a good job still giving the reader a feel for Meave and her struggles and her belief in the Peace Keeper order. There also was a bit of a emotional scene for Meave as she has to make a difficult decision.

Just as in The Carnelian Fox I thought the author wrote the battle scene well. It was easy to visualize what was going on and I liked seeing some of the cool powers Meave and Lilley used. As well as getting a feel for their magic and what they did to stop those who abused their powers.

To summarize: This was a nice short read. It is really short, but it doesn’t feel rushed. There is a big battle and I like how the author writes the action. There are some cool powers that Meave and Lilley use. It’s a bit too short to really get a good feel for the characters and world, but I liked the pieces we got and how the author still manages to provide some information about the magic, the Peace Keepers and what the world looks like so we get a bit of a feel for the world. I also liked how there was a bit about Meave so you could get a feel for her personality and there’s a difficult decision she has to make.

2 responses to “Review: Trial of the Red Rune by Kay MacLeod”