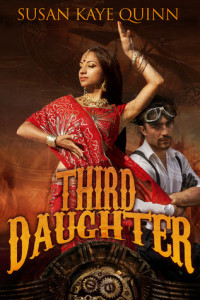 Blurb:
The Third Daughter of the Queen wants her birthday to arrive so she’ll be free to marry for love, but rumors of a new flying weapon may force her to accept a barbarian prince’s proposal for a peace-brokering marriage. Desperate to marry the charming courtesan she loves, Aniri agrees to the prince’s proposal as a subterfuge in order to spy on him, find the weapon, and hopefully avoid both war and an arranged marriage to a man she does not love.

My Review:
I bought this book as soon as it was released and I don’t understand why it took me so long before starting it. As soon as I started this book I was hooked by the amazing world and story Susan has created and this author is definitely one of my favourite authors now. I just love how she creates these amazing worlds and it made me feel like I was there beside Aniri experiencing everything.

Third Daughter is a fast paced book with beautifull descriptions of the locations and events. It is written in third perspective, but it was done really well and after the first few pages I didn’t even notice it anymore, it just fit the book and the story. The story has a lot of different things to keep readers interested, there is some mystery and intrigue, some politics and ofcourse romance. It was all packed into an addictive story. I did figure out some plot twists pretty early on, but it didn’t make the book less fun to read. I just had so much fun reading this book and it was so different from other book, the bollypunk feel of the book was something unique for sure and I really enjoyed it.

At first I had a bit of a hard time relating to soem of the characters although I liked Aniri basically from the start, while she makes mistakes, she also does some really brave and honerable things. I really liked Aniri, she could be a bit rushed and naive at times, but she had her heart of the right place and she was easy to like. Prince Ash was such a great character as well and I really liked him. Priya and Aniri’s guard (I forgot his name) where great side characters and I really liked both of them. And there’s this great character that only makes one appearance later in this book, I don’t even remember if we got her name, but I really liked her and she showed kindness when she didn’t have any reason to.

The romance was well paced and I liked how it developed. It was done really well and nicely complemented the story, although I would’ve liked to see some more romance. Sometimes it felt like Aniri just kept pushing the romancy thoughts away and I would’ve liked to know a bit more about she thought and felt at some moments.

The world building was done well and without any info dumps. It was woven naturally into the story and pieces where revealed when the story progressed, it all felt very natural and the reader discovers more about the world alongside Aniri. I like the descriptions of the palaces, places, cities and surroundings, I could easily imagine what the world looked like and the world building all made sense. There where even some technological things that while fictional where described well enough that it sounded like it could actually be true.

To Conclude: I loved Third Daughter and was hooked as soon as I read the first few pages. Aniri was a great main character and easy to like. The story is packed with action, romance and even some political intrigue and I loved every aspect of it. The side characters where likeable as well and I really liked the world building, it was woven naturally into the story. All in all this was a great read and I can’t wait to read future books in this series!

You can find Third Daughter on Goodreads