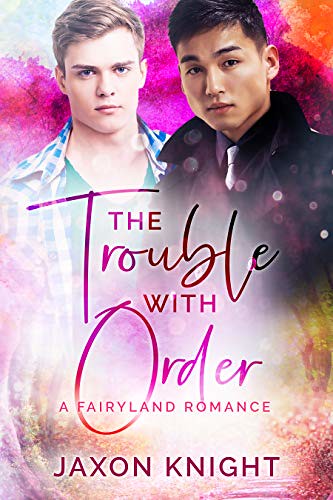 The Trouble with Order (Fairyland Romances #5)
by Jaxon Knight

Link’s past was difficult but he learned to skim through life and have things work out right, Teayang has worked for what he has and sacrificed things along the way.

When Taeyang is cast as Lord Order, the villain opposite Link’s fun-loving Fairy Mischief, there’s instant chemistry that can’t be denied.

Outside of acting at Fairyland, Link’s life is falling apart and he has no idea how to handle it alone. But years of putting up walls and projecting a happy image makes it impossible to ask for help as well.

Taeyang may love playing a villain, but in real life, he yearns to reach out to his acting partner, if he’d only accept that help…

Can a villain become a friend? Or something even more?

The Trouble with Order is a slow burn, opposites attract MM sweet romance featuring team building, silliness, troublesome parents, assumptions, green smoothies and a HEA. It can be read as a standalone but is best read as part of the Fairyland series.

I enjoy spending time at the Fairyland theme park. The Trouble With Order is the newest book in this series. Each book follows a different couple, but there are plenty of short cameo appearances from previous couples as well. The theme park setting is something I really like about these books and the fun vibe these stories have.

The Trouble with order follows the point of view of Link, whom we met in The Good, The Bad and the Dad. His love interest is Taeyang, a new character. It was fun already knowing one of the characters and I think having already seen Link in a previous book helped a lot, especially as he’s a bit down at the start of this book and not showing his best side. Teayang is easy to like, he’s just a great character and sees the best in people and gives them the benefit of the doubt. He’s very supportive and just super nice to everyone he meets.

This book has a fun new change in the Fairyland theme park. While they mostly have the good guys as characters in the park, now there are 4 new villains who will join the good guys as characters in the park. It was fun to see how this changed things up and see the good characters get used to interacting with the villain characters. My only complaint was that I wanted more Fairyland scenes. I always really like spending time in the park and seeing how they deal with situations while in character. There were a few times we only got to hear how something went in a sort of flashback and other times I just would’ve liked a few more of these scenes as they are so fun. The theme park setting is a lot of fun and it works so well here. I really liked seeing Link as fairy Mischief as well of some of the interactions with Teayang as the villain Lord Order.

I liked the romance, but it took me a bit to get invested. I felt the first part of the book until the house situation gets resolved was a bit slow. Link is in a bit of a slump as we mostly see him being absorbed in his own problems at the start. Luckily I already seen him as a side character and had a decent feel for his character. Once the housing situation got resolved he really showed his true colors and became a lot more likable. By then I also started feeling the romance a bit more.

I really liked these two together. There are some cute scenes of them and we also get to see a bit of them handling their first few days as a couple, which I liked seeing. I like seeing how Teayang took care of Link and how he liked cooking. Link has some troubles he has to deal with and I liked how supportive Teayang is. At first it feels like the big deal is going to be how Teayang is all about order and Link about chaos, but I felt that actually wasn’t a big part of the romance. It’s mostly that slightly awkward and sweet situation where they aren’t sure of their feelings or if the other returns them. I liked how they actually talked about things. I would’ve liked to see a bit more about Teayang’s background and troubles as the focus was mostly on Link’s troubles and Teayang being supportive and I felt that there was more to Teayang than what we’ve seen so far.

I liked meeting the new side characters, mostly other new villains as well as another fairy character. As Link’s best friend we see plenty of Cillian, as well as Grayson. Then are there are some of the other previous couples, most of them have a mention or appearance or two. Which is fun.

To summarize: I had fun returning to the Fairyland theme park again, this time there are new villain characters who make their entrance. I liked how this shook things up in the park and it was to read about. The start of this book felt a bit slow to me with Link dealing with some stuff and being down about it. Once that got resolved Link was a lot more likeable and I really started to feel the romance then. Teayang is very kind, supportive and easy to like. There are plenty of sweet scenes between these two and they made for a great couple.