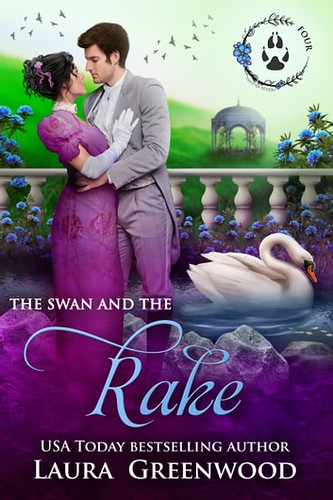 Blurb:
Miss Letitia Swanley has no intention of marrying just yet, but that doesn’t stop her from getting swept into the arms of a handsome swan shifter.

Lord Philip Cygnus knows he has a duty to his father’s earldom, but isn’t ready to settle down.

When the two of them are caught in a compromising position, they have no choice but to marry. And now that they have, can the two swan shifters allow themselves to fall in love?

The Swan and the Rake is a paranormal Regency romance with swan shifters. It is part of the Shifter Season series. It has a forced proximity m/f romance and is Letitia and Philip’s complete story.

I received a free copy of this book from the author through Booksprout and voluntarily reviewed it.

I don’t think I ever heard of a historical romance book with shifters and was excited to give this series a try. The Swan and The Rake is a sweet historical romance about two swan shifters who don’t want to marry, but enjoy flirting with eahc other at social functions. When they are caught in a compromising position they have to marry each other.

I liked how Letitia and Philip already knew each other and enjoyed each others company before they were forced to marry one another. Neither wants marriage, but they slowly figure out it might not be so bad. I liked Letitia and Philip together, but had a bit of a trouble really feeling their romance for a while as part of them growing close already happened before the book. I don’t read a lot of historical fiction and find the dialogue can feel a bit more stilted to me as I am not accustomed to it. I had that issue with this book too, although it got better the further I got. Letitia and Philip both don’t realize the depth of their feelings till later in the book, which made it a bit harder to understand how deep their feeling ran as they literally don’t realize it themselves.

I liked seeing Letitia and Philip together and how they’re both committed to making this marriage work. There are some fun scenes with them. As well as some troubles along the way like Philip’s mother not approving of Letitia. I also liked the bit of set up for Letitia’s friends who I think will find their romances next in the series.

The shifter and historical themes combined surprisingly well. I liked how there was plenty of moments they referred to the shifter type and how there were these little differences to normal historical romance books with the addition of shifters. Even though there was only one scene in which they shift forms, it was still clearly part of the story. It was clear each shifter type had their own things and I liked reading about the swan houses and them swimming at balls. There’s also a mention of otter shifters having stones and I assume every type has their own little quirks and habits, which I thought was a nice touch.

To summarize: The Swan and The Rake was a nice historical paranormal romance book. I liked the addition of shifters in a historical romance book. I don’t read a lot of historical fiction and struggled a bit getting into the story and dialogue because of that. Letitia and Philip clearly already share a connection before the story even starts and I liked seeing them figure out their feelings. It took me some time to really feel their connection as they’re apart for some time and then have to figure out themselves what they’re feeling. I thought the mix of historical romance and shifters was well done and I found the two genres made for a fun combination. I liked the mentions of shifter type and little quirks or habits each shifter type had.

4 responses to “Review: The Swan and The Rake by Laura Greenwood”