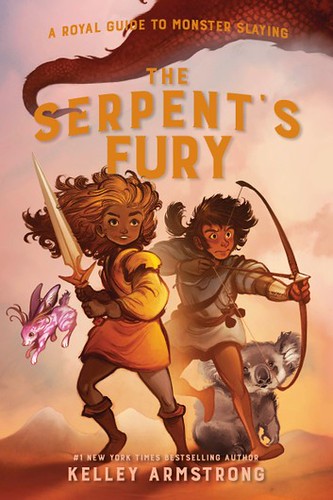 Blurb:
Rowan faces her most dangerous monster-slaying challenge yet, confronting what could be the most infamous monster of all, in the third book in this fantastical series by New York Times bestselling author, Kelley Armstrong.

Rowan is Tamarel’s Royal Monster Hunter, and her twin brother, Rhydd, will be its king. After the events of The Gryphon’s Lair, Rowan, along with her friends, her brother and an entourage of monstrous companions, makes her way back to the Dunnian Woods to deal with the pack of dropbears the group trapped in an abandoned cabin after a vicious attack. The dropbears are just one of a number of rare monster species acting erratically in Tamarel.

After a swarm of colocolos nearly tramples the group, Rowan becomes convinced that someone (or something) is driving these monsters out of their natural habitats. But nothing can prepare the Royal Monster Hunter for the truth of the matter: monsters even bigger and deadlier than gryphons have returned to the world, and their nest-building, as well as the actions of the humans trying to drive them out, has upset the balance of nature in Tamarel.

Do Rowan’s “monster magnet” skills work against the most fearsome monsters imaginable? Find out in this exciting third book in the Royal Guide to Monster Slaying series!

I really like this series and this book was just as good as the previous ones. The Serpent’s Fury follows Rowan and the rest of the characters as they go back to the cabin where they trapped some dropbears in book 2 and try and figure out what’s causing the dropbears to move somewhere they usually aren’t.

I really enjoyed this book, with how Rowan and the rest have a clear goal from the start and encounter many obstacles on their investigation. This book was so much fun to read, I liked reading about the monsters and seeing how Rowan dealt with everything. She’s a great main character and I like how she deals with things, she feels mature for her age and handles the responsibility well, but also makes some mistakes at times and then aims to correct those. I enjoy seeing her learn and adapt along the way and her bond with the monsters she encountered.

I liked the new monsters the characters encounter in this book and the serpent that is referred to in the title was awesome to meet. I also liked seeing more of Rowan, Dain and the rest and the monsters they travel with. There are new monsters and new characters as well in this book. The ending sets things up for the next book, while also wrapping up this book’s adventure in a satisfying way.

To summarize: This was another great book in this series. I really like this author’s writing style and this series is just so fun to read. Rowan and the others investigate what’s causing monsters to move to places they usually aren’t seen and along the way they meet new characters and monsters. I like reading about Rowan and how she deals with everything on her path. There are some exciting new monsters in this book and the book is just a whole lot of fun to read. I am already looking forward to the next book!

4 responses to “Review: The Serpent’s Fury by Kelley Armstrong”