This is a review for a book for the Fate Core tabletop roleplaying game. I myself GM a Fate Core campaign which I play with a group of friends and I enjoy reading as many Fate Core books as I can get my hands on. I’ve decided to review these books on my blog as well. 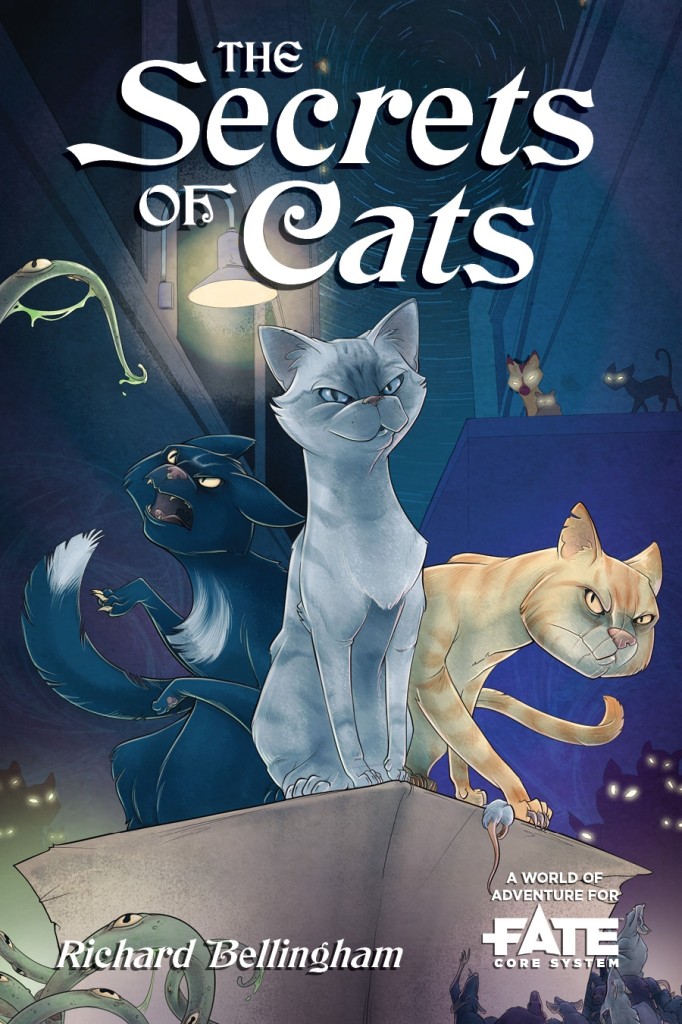 The Secrets of the Cats: A world of Adventure for Fate Core
by Richard Bellingham

My Review:
I grabbed my copy of The Secrets of Cats as soon as I saw it on Drive Thru RPG, the cover and title convinced me I had to read this before I even noticed it was an official Fate Core world by Evil Hat Productions. The Secrets of cats offers a fun and original setting for Fate Core and I am sure I’ll be testing this setting as it sounds like a fun setting for a Fate campaign.

This Fate world book has a different build-up and order of chapters then Venture City and it’s obvious it’s written by a different author, but that was part of the fun. Just like Venture City I would recommend reading the Fate Core book first to get a feel for the system, as this book doesn’t contain explanations of basic Fate concepts.

The Secrets of Cats is an original setting where instead of humans or humanoids the players play cats and most of the NPC’s are sentient animals as well. Humans play a very different role in this world, they are called Burdens and their cats protect them from all kind of magical and weird things that are out there. I thought it was such a fun an dgreat idea to have the players play cats and it add a very different dynamic to this setting and gives it a very original feel!

This book contains chapters that deal with character creation, an example setting and some example NPC’s. Beside that there is also a unique magic system that can be adapted to other settings as well and the magic is very different from what I’ve seen so far in fate, but I really liked it. I did think the magic system was a bit comlicated and would have liked a few more pages about it. Also the example story gives you enough materials to function as a one shot standalone campaign, but can also be sued as the start of a longer running campaign and there are even tips on how the expand the setting, complicate things a bit or to use it as start of a longer campaign. I thought this was a nice addition as I usually prefer running longer campaigns and this book gave enough building blocks to give you a sense of what dangers or story plots to throw in such a campaign.

I would’ve liked to see some more examples for possible compels or aspects as I am noticing I find that one of the more difficult parts of fate. On the other hand there where a lot of premade stunts, the stunts where very diverse and ordered by Skill and I think any player could have enough possible stunts to choose from if using this book only, but they also give a good idea of how to come up with your own stunts.

To conclude: I was hooked the first time I heard of this setting and I love the original idea of having the players play cats instead of humanoids. It adds a nice flavour to the game and combined with the example setting and an unique magic system this book provides a lot of material to get your started with your own campaign. All in all this sounds like a fun setting and I can’t wait to play a campaign in this world!

You can buy The Secrets of Cats here:
–Drive Thru RPG

8 responses to “Review: The Secrets of Cats by Richard Bellingham”