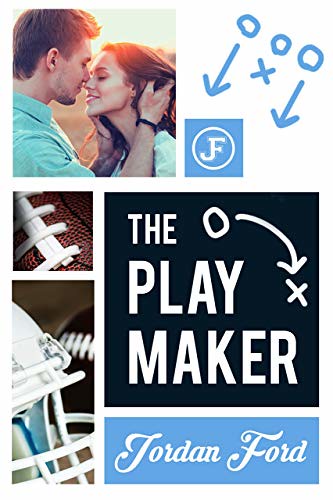 Blurb:
Can the quirkiest girl in school win over the coolest guy on the football team?

This is it—Tori’s senior year. Her last chance to leave Nelson High without a bucketload of regrets. Number one priority—get Colt to fall in love with her.

So what if he’s the Raider’s number one playmaker?
So what if he’s so far out of her league the idea of them together would rupture the school’s social order?
She has to try, before it’s too late.

She’s come up with the perfect excuse to spend more time with him. All Colt has to do is think he’s helping her win over one of his teammates, and in the process he’ll fall madly in love with her.

Colt wants one thing: to play football after high school. But his grades are tanking and his dreams of playing college ball are fading…fast. He doesn’t really have time to waste helping out Tori, but they were friends in middle-school and he just can’t turn her down. Besides, how hard can it be to get one of his teammates to notice her?

He’ll help her out, and then he’ll focus on what’s really important: football…assuming he can stop thinking about the last girl who could ever steal his heart.

If you’re a fan of small-town football, field parties, high school angst and melt-your-heart kisses, then you’ll love The Playmaker.

The Nelson High Raiders series was one of the few series by Jordan Ford I hadn’t read yet and I am so excited to have the chance to read these now as well. The Playmaker is the first book in this series, which introduces the Nelson High Raiders football team and I had fun reading this book. It was one of those books I wanted to keep reading as I had to know how it all turned out.

This book follows Tori and Colt. Tori wants to make her senior year great and to do that she has this big plan to make Colt notice her. Colt is a cool footballer and she’s the daughter of a hippie. They don’t run in the same circles, so Tori knows she has to do something to make him notice her. To be honest I totally agreed with Tori’s best friend Amy when it came to Tori’s plan to get Colt notice her. And at the same time it sounds exactly like the type of a plan a teenager would come up with, it felt realistic. There is teenage drama, romance and football.

While I wasn’t a fan of Tori’s plan how she lied to Colt about her real reason she wanted to spend time with him, I couldn’t help but like these two together. There are some great scenes where they spend time helping each other. One of my favorite scenes is where Colt shares one of his secrets with Tori and opens up to her and she accept him and his secret and helps him instead. I really liked that and it really shows what a kind person Tori is. There was more to both of these characters than I first thought and I liked them even more as the book progressed.

I like how Jordan Ford can really capture the essence of teenage drama without making it over the top or too much. I thought Colt’s worries about Tori not fitting in with the football crowd were realistic. Same with Tori’s worries that she had to change to fit in. I all felt realistic, even though it made me sad. I wanted Colt to not worry about his status and Tori to realize she could be herself. I like how in the end it gets wrapped up in a great way. My only complaint is that I would’ve loved to see a bit of them together, they only get together late in the book and I would’ve liked to see a bit more of them as a couple. As this is the first book in the series I hope to get that in book 2.

Besides the two main characters there are some great side characters too. I really liked Tori’s best friend Amy and am hoping we will see more of her in future books. Then there are the other Nelson High raiders team members, I liked how they stuck together and helped each other out, they felt like a close group and I am excited to see who will get their own story and romance and spend more time with these characters. The sport aspect is an important part of the story, but it doesn’t overtake the romance plot line and even tough I don’t know a lot about football I was able to follow those scenes.

To summarize: This was a great young adult contemporary romance book. I liked how the author gives it this realistic vibe, I could understand the characters worries and insecurities. I liked Tori, although I wasn’t a fan of her plan how she wanted to win Colt over, I did like their romance. There are some great scenes where they spend time together and I enjoyed them growing closer and Colt realizing how he felt for her. I liked how the book got wrapped up and some of the realizations they have. I liked the side characters and look forward to more books in this series.

2 responses to “Review: The Playmaker by Jordan Ford”