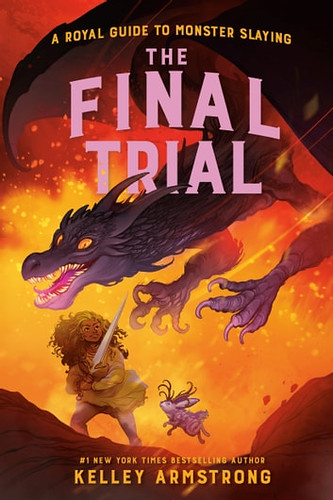 Blurb:
Rowan embarks on an expedition to prove once and for all that she is the rightful royal monster hunter, in the fourth and final book in this fantastical series by New York Times–bestselling author, Kelley Armstrong.

The time has come! After discovering the true reason for the monster migration, Rowan is on an expedition to ultimately prove that she is worthy of the ebony monster-slaying sword on her back. She and her twin brother, Rhydd, their friends Dain and Alianor, as well as some other trusted advisors — and the ever-growing group of monstrous companions — are on a mission to help protect the dragon living in their homeland and are travelling to kingdoms beyond to make their case. But not everyone agrees that people can live peacefully alongside monsters, especially when new terrifying creatures appear. It will take everything Rowan has to fight off threats of all kinds, from both monsters and people. It won’t be easy, but if she succeeds, she will become Royal Monster Hunter at long last.

The Final Trial is the fourth and last book in the Royal Guide to Monster Slaying series. I really enjoyed this series and am sad to see it come to and end, but The Final Trial is an amazing ending to this series. Like the previous books it’s packed full with adventure, danger and monsters.

The Final Trial starts off shortly after the ending of book 3 and I easily got sucked back into the story, although I felt the start was a bit slower than the rest of the book. Setting the stage and getting the characters where they need to be. After that it gets really good and I struggled to put it down. There’s an amazing battle scene where I really feared for how Rowan would get out of this. And then another great one late in the book with a great reveal and twists that was so well done.

Rowan is an awesome main character and it’s been great seeing her grow throughout the series and really settle into her role as the royal monster hunter. In this book she looks back herself too and realizes how far she has come and that was great to see. I like how she solves problems, both those of the monster variety as well as tensions between her and her friends. I enjoyed seeing her interact with her friends as well as her monster companions and how they solved things together.

I really enjoy reading about all the monsters in this series, the way the author brings them to life with plenty of details and vivid descriptions. There are plenty of new monsters Rowan and the rest encounter in this book and I really enjoyed reading about them, from friendly monsters to those who cause trouble to really dangerous ones and surprising friends.

The last chapters form a satisfying ending to this series and I thought it wrapped up the series well, although at the same time I wouldn’t say no to more books. This series has been so much fun to read and I enjoyed following Rowan and her friends on their adventures.

To summarize: This series was a great read. Filled with adventure, great characters and interesting monsters. This was an awesome ending to the series, but I am sad to see it end. The start was a bit slower, but I was quickly hooked. There are some exciting and tense battle scenes as well as a great twist and reveal toward the end. I wondered how Rowan would get out of some of the situations in this book and wanted to keep reading to find out. Rowan is a great character and I really enjoyed reading about her, seeing how she dealt with everything and grew throughout the series. Seeing her interact with her friends and monster companions is great. And I enjoyed seeing her deal with all sorts of monster related problems as well as tensions within her group. The monsters really come alive with vivid descriptions and plenty of details and it was so interesting to read about all these various monsters. All in all an awesome series that I really enjoyed reading.

One response to “Review: The Final Trial by Kelley Armstrong”