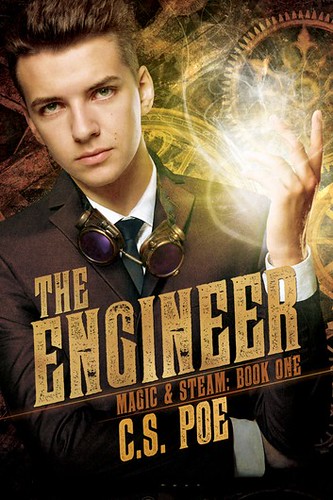 Blurb:
1881—Special Agent Gillian Hamilton is a magic caster with the Federal Bureau of Magic and Steam. He’s sent to Shallow Grave, Arizona, to arrest a madman engineer known as Tinkerer, who’s responsible for blowing up half of Baltimore. Gillian has handled some of the worst criminals in the Bureau’s history, so this assignment shouldn’t be a problem. But even he’s taken aback by a run-in with the country’s most infamous outlaw, Gunner the Deadly.

Gunner is also stalking Shallow Grave in search of Tinkerer, who will stop at nothing to take control of the town’s silver mines. Neither Gillian nor Gunner are willing to let Tinkerer hurt more innocent people, so they agree to a very temporary partnership.

If facing illegal magic, Gatling gun contraptions, and a wild engineer in America’s frontier wasn’t enough trouble for a city boy, Gillian must also come to terms with the reality that he’s rather fond of his partner. But even if they live through this adventure, Gillian fears there’s no chance for love between a special agent and outlaw.

I had fun reading this story. The Engineer has an awesome mix of genres it’s a steampunk novel with magic set in the past with a MM romance. And it was awesome. The main character Special Agent Gillian Hamilton is a magic caster and works for the Federal Bureau of Magic and Steam. He is sent to track down a dangerous man called the tinkerer, but this turns out to be more effort than one man can handle. He eventually teams up with Gunner the Deadly, a wanted outlaw who is after the tinkerer for his own reasons. And there is a mutual attraction between Gunner and Gillian.

While The Engineer is clearly only the start of this story I like how it reads as a complete story. It starts the romance of Gillian and Gunner and ends that on a hopeful note. The danger of the tinkerer gets wrapped up within the story as well. It’s fast paced, but not rushed. I really enjoyed reading this one. The western style setting was great and combined with the steampunk and magic elements made for a great background for the story.

I liked Gillian as a main character, he seemed capable and I liked his talent with magic. I also appreciated that he adjusts his opinion of Gunner when it becomes clear he isn’t as bad as he thought. I also like how human he feels with how he freely admits to himself to being lonely and hoping his connection with Gunner might lead to more. Gunner himself stays a bit more of a mystery, but I think that worked well here. I like how we get some insight into his character mostly thanks to what other characters say about him and also how he acts himself.

These two made for a great team. It’s a bit of an enemies to lovers vibe, but they quite quickly change from enemies to reluctant allies and then lovers as this is a shorter read. Nevertheless it felt believable enough. Their mutual attraction was clear and I like how while they share a bed in this book it’s also clear this only the start of their feelings and romance. It’s clear there are some feelings on both sides and I look forward to seeing how that develops into more in the next book.

I liked how we learn a bit about how magic works as the story progresses and I really liked the descriptions of Gillian’s magic use. It’s easy to visualize what his elemental powers might look like and it makes for some epic battle moves. The western setting worked well for this setting and I liked the steampunk vibe. There are some exciting steampunk creations from their enemy. As well as guns that can shoot magic bullets.

To summarize: I had a lot of fun reading this book. It’s a fun past paced read with a great mix of genres, it has a western historical setting, steampunk and magic as well as a mm romance. There is plenty of action as Gillian and Gunner team up to try and stop a madman tinkerer. And there is some steam as well as Gillian and Gunner give in to their mutual attraction. I liked Gillian and Gunner and thought the author did a good job giving us a feel for their personalities. Their mutual contraction slowly turns to more and sets the stage for their romance, which be hopefully see develop more in the next book. I liked the western setting and the combination of steampunk and magic. All aspects are well done and I liked how we get to see some awesome elemental magic as well as some cool steampunk creations. All in a great read and I already bought book 2.

2 responses to “Review: The Engineer by C.S. Poe”