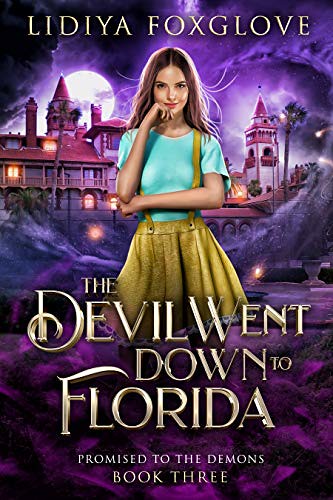 Blurb:
Variel, my sexy well-endowed demon is trying to learn to be mortal.
Piers, my broken but beloved warlock, will face the family he once tormented.
And Bevan, my handsome bat shifter, will be tempted by power and darkness.

I will return to my home city of St. Augustine and the warlock who nearly killed me, while attempting to change the world for the better, so that familiars can no longer be treated as servants. The task before us will take every ounce of my courage, but with my men at my side, and a few magical scones…I have faith in broken curses, patched-up hearts, and happy endings.

THE DEVIL WENT DOWN TO FLORIDA is the final book in a very sexy but sweet-as-pie paranormal reverse harem about a shifter girl who loves to bake and the bad boys who are brought to their knees.

The Devil Went Down to Florida is the last book in this series and I thought it made for a great ending to the series. Celeste and her guys are fighting to free familiars in this series, they already broke the covenants, but they still have to find the cloak. To do so they have to return to the town where Celeste grew up and she has to face her warlock and more as they try to find the cloak.

It took me a bit to get into this book as I had to remember all what had happened in previous books, but soon I was back into this world and following Celeste and her guys along. I like that they fight for the fate of all familiars and I was curious to see how this all would play out. There are many obstacles on their road and for a long time I wasn’t quite sure how they would resolve all of this. I liked how things got resolved. It’s not without bloodshed or pain, but I liked how negotiations where parts of it as well and the end solution seemed such a great way to resolve this whole thing.

One of my favorite parts of this series is Celeste and the amount of character development and change. Let me start with Celeste. I just love her as a main character, I like how sweet and nice she is, she can be a bit naive at times, but mostly I found it refreshing how she maintains that nice attitude even after all she’s been through. She still believes in the best of people and I like how she believes in forgiveness, but also that people have to earn it. And seeing her stand her ground against her wizard and realizing she had to care for herself first was amazing. I just really liked her outlook on things and the way she interacted with others.

Then for the character development, every one of Celeste’s guys goes through a lot of change in this series. As well as Celeste herself and even some of the side characters. This book really brings that point home as you can look back and realize all the changes the characters have been through.

I didn’t like Variel at first, but I like him a lot more now. And seeing how he is now in book 3 makes me understand more why the author had hims start out that way and his transformation wouldn’t have been as powerful without it. It also makes sense how his change would be slowly at first and I thought it felt believable and I liked how he is still the same character, but different too. And that scene with the kite was so sweet!

While Bevan was very likable at first, he actually becomes more unlikable as time goes on due to something that happens. Especially in this book you see that struggle. I was happy when that got resolved. Piers was the villain in other series set in this universe and it was great to see him change and be a different person. He was actually the one I liked most. The way he interacts with Celeste is awesome. He’s so genuinely nice now and also realizes he did bad things and want to atone for them.

Another thing I really liked about this book is seeing the three guys bond together more and become closer as they all love Celeste. I liked the scenes where they help eahc other out and it’s great to see how much they are all a family now.

The ending was awesome and I liked seeing that glimpse of what their lives would be like now all of this was resolved. I also liked the epilogue and how well it shows the change they brought upon the world of wizards and familiars.

To summarize: This was a great ending to the series. Celeste and her three guys still have a lot to achieve and fight for in this book and I liked seeing how it all got resolved. I really like Celeste as main character and how sweet she is and how she sees the best in people. I also like how while she believes in forgiveness, she also believes it has to be earned. This series has some great character development over the course of the books. It’s really great to see how Variel, Bevan and Piers change over the course of the series. I liked seeing them grow closer to each other in this last book and they really feel like a family by the end. The ending and epilogue was awesome and I liked seeing how the changes they caused play out. Another solid series by this author.

2 responses to “Review: The Devil Went Down to Florida by Lidiya Foxglove”