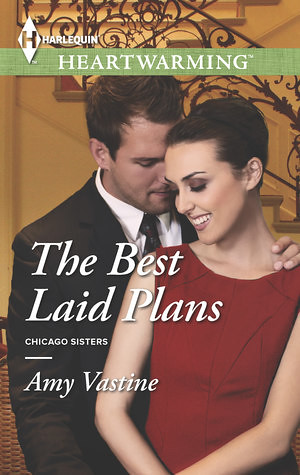 Blurb:
She planned on falling in love. Just not with him!

Emma Everhart’s life is going according to plan. Finish nursing school with flying colours… Check. Get a great job in the ER… Check. Marry a handsome doctor and have two babies, three years apart… Not quite yet. But with a dreamy new doctor joining the hospital staff, she’s so close she can almost taste the wedding cake. Now is not the time to let the tall, dark and flirtatious paramedic Charlie Fletcher distract her! He may be the best date and best kiss she’s ever had, but he’s definitely not part of her plan. No matter how he makes her feel…

After reading The Better Man I was really excited when I heard the author was writing a book about each of the sisters. The Best Laid Plans is Emma her book, although technically it can be read as a standalone I think you’ll enjoy this book much more if you read the Better Man first. Emma has story has already started in the first book, although this one focusses on her story. Just like Kendall her story was in the first book, but we still get to see her a lot in this book and it contains some important scenes for her as well. I really liked how the author has interwoven these stories, while focussing on a different sister each book. It was fun to see the characters we met in the first book make some appearances in this book, while also focussing on the new main character.

I really enjoyed this story, it’s a sweet romance and it had me hooked from the first page. I like Amy Vastine her writing style and she writes great sweet romances where I root for the couple. There are a few scenes towards the end of the book which I liked less, although I did like and understood Charlie his decision. I didn’t like that Emma jumped to conclusions and then basically did the same thing she accused Charlie of. Then later on she makes a scene which wasn’t about her, about her due to focussing on her. I would’ve preferred if she had solved it a different way, although I did like the actual ending.

The thing I love most about this book and Amy her books in general are the characters. That is where this book really shines. Every character we meet has a past, a present and a future. They have motives, a personality and they change over the course of the book. I like how we not only get to know the main characters, but almost everyone they can come in contact with, it’s realistic. This might sound overwhelming, but it isn’t. It is done really well and I enjoyed feeling like all the characters had their own lives. We get to know Emma her co-workers, Charlie his co-workers, one other family Charlie is friends with and both families of Emma and Charlie. I never had trouble keeping anyone apart as everyone is different, even with such a big cast of characters.

The romance was done really well and I think Charlie and Emma where great for each other. Charlie is this super carefree nice guy, while Emma has her plans and believes live should go according to plan. I could relate to Emma as I am a planner myself as well, although I don’t plan the details of my live as much as she does. At first I thought it was a bit weird how much she believed she could plan her live and control her fate, but as the book progresses I started to understand her better. There where some really sweets scenes between them and I liked how their romance progressed slowly, but steady.

To conclude: I really enjoyed this book, there were a few scenes I wasn’t a fan of, but in general I fell in love with this book. The thing that really makes this book shine is the characters and it’s great cast of characters with all their own personalities and motives. The romance was sweet and I can’t wait for the last book in this series.

Do you like romances where the characters are seemingly opposites?

6 responses to “Review: The Best Laid Plans by Amy Vastine”