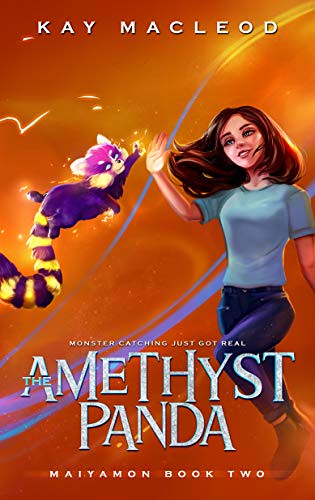 Blurb:
Monsters do exist. The humans working to destroy them are way more dangerous.

All Sam wants is to grieve alone with the surviving members of her team, but she has information people will kill for. Now she’s stuck between a delusional girl obsessed with an imaginary monster, an overbearing descendent of the game’s creator, and a violent hate group determined to end Maiyamon for good.

The last thing she wants is to expose her team again. But Sam doesn’t have much choice when she uncovers a plot to remove all monsters from the world. She’s going to need allies if she wants to protect her Gems, even if she can’t bring herself to trust them.

I really enjoyed The Carnelian Fox and even read it twice already (once as ebook and once as audio) before book 2 even released and I happily jumped into book 2 when my copy arrived. The Amethyst Panda is an awesome sequel. It has more of the same what the first book had, more fights, more adventure, more characters and more monsters. And at the same time also builds on book 1 really well and dives deeper into a lot of a topics. It was such a great read and by the end I am again left wanting more.

The Amethyst Panda starts off in a bit of a bleak spot, Sam is in a tough spot after what happened at the end of book 1 and she has to deal with another setback as the book starts. Sam’s development and change in this book is one of my favorite parts. She’s in this difficult place, she’s hurting and just a bit broken, she doesn’t trust people anymore and struggles to deal with the loss she experienced. And then slowly she starts to heal, there are some awesome scenes and I love how she found new friends and people who were there for her and helped her along. And the scene at the end of the book was so emotional and touching and I loved what a perfect ending of the book it is and how it wraps up part of Sam’s journey.

Sam has some important information, or at least people think she has this information, and this brings her into trouble. She finds new people to travel with, meets some more new people along the way and some characters from the first book make a return as well. I kinda liked how this book mostly featured a different group of characters than book 1. I wasn’t quite sure what to think of one of the new characters we meet as she rubbed me the wrong way at times, but I love how this author writes such realistic characters that feel real and I can understand why they act a certain way. Even Sam has her moment where she can be a bit judgmental, but I loved how she admitted some of her mistakes in this one when she got a different perspective.

This book has a different vibe than the first and at the same time is a good continuation. This book has a slightly darker vibe, but that fit with what Sam went through and I liked how we really see how these events from book 1 impact her. One of my minor issues with book 1 was that some events lacked a bit of impact, but this book doesn’t have that issue at all, we really feel the depth of her emotions and troubles and her mistrust of other people. And then slowly seeing her starts to heal a bit was great. This book also is a bit slower paced and more characters focused than book 1 and I liked that. It really gave the author the chance to dive deeper into Sam’s personality and I felt like I understood her better and why she did certain things in this book.

There are still plenty of epic monster battles as well in this book and I like how the author writes the action scenes, they are all so easy to visualize and engaging to read. I liked how there was a good mix of between the action and story driven parts and more characters focused parts in this book.

I can’t write a review of this book without mentioning the monsters. I loved getting to know Sam’s Gems more in this book. Rica, the red panda who is on the cover of this book, really is the star of this book. And after listening to the audio of book 1 I can’t help but hear her voice in my head when she talks to Sam. She has so much personality and I also like how she’s there for Sam and how she helps Sam in her own way. There’s also more of Finn, Sam’s fox and first gem, and ofcourse Sev who still likes to cuddle. There are some struggles with Dew due to his berserker trait and we get to know Vortex more too. We only met him late last book, so it was nice to see more of him here. Then there are the Gems of the other characters Sam meets. I liked how it was easier in this book to keep track of who everyone was and who their Gems were.

There’s some great build-up to a big event and battle toward the end of the book. While I was pretty sure about part of the direction it would go to, there are some surprises along the way. I like how it all got resolved and it was awesome seeing the big fight and results of it at the end of the book. It was a great way to wrap up the story and leaves me eager for more.

To summarize: I think book 2 might be even better than the first. I really enjoyed this book. It starts off with Sam in a rough spot and struggling after what happened at the end of book 1 and then slowly we starts seeing her heal, which was great to see. I really liked the focus on Sam’s character and how she deals with everything that happened to her. This book has a slightly darker tone than book 1 with more focus on Sam’s struggles and more character driven than book 1. I liked the balance between the story and action as well as the more character focused parts. There are again some cool fight scenes and I like how the author writes those and how easy to visualize they are. There is some build-up toward this big event at the end of the book, which made for an epic conclusion of this book, while also leaving me eager for more. I enjoyed seeing more of Sam’s Gems and seeing them change and develop alongside her. There are some great new side characters as well and I like how all the characters feel realistic, even tough they might not always be likable, I could understand why they acted that way. All in all this was an awesome sequel and I can’t wait for more of this series!

2 responses to “Review: The Amethyst Panda by Kay MacLeod”