The Aether Sea is an adventure world for Fate Core (A tabletop roleplaying game). 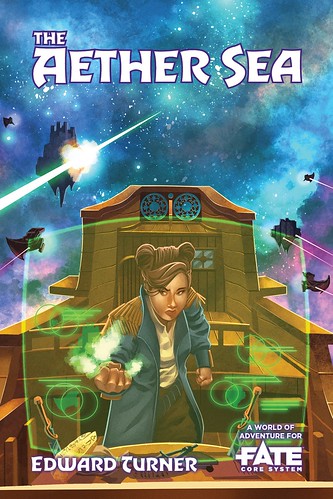 The Aether Sea
by Edward Turner

One huge expanse of aetherspace.

Maneuver your ship through the vast aether in The Aether Sea, a Fate world and adventure by Ed Turner. A thousand years of war on Homeworld left it a magically-blighted wasteland, so the elves and dwarves stopped fighting for five minutes and figured out how to leave it behind. Soon everyone took to the vast, empty aether sea. The Royal Hegemony keeps a tight rein on the Spellcaster’s Union, and the magic that makes aether travel possible. Play the crew of a little aethercraft out in the deep sea. But you’ve got bad blood with the Royals, so take jobs carefully and make do with the best magic unofficial channels can provide. Keeping the ship afloat won’t be easy. The sea’s a dark and lonely place, and secondhand magic is… fussy. When it works at all.

The Aether Sea. Batten down the hatches and get ready for liftoff!

My Review:
The Aether Sea is a great setting for Fate. From the first page I was intrigued in this world were different fantasy races fled their homeworld and started exploring the aether. It’s space, but also with a definite sea faring feel and I like how the different terminology gives it another feel. It’s a setting that really appeals to me and I would love to play a session or campaign in this world once.

Another thing hat surprised me is how effortless it combines fantasy and sci-fi, without it being strange. It’s really neat and each race has a small bonus. It’s not a whole lot, but it’s still a nice bonus and managed to give some flavor to the different races.

One things that bothered me a bit is how they use FEA, I prefer Fate Core and was constantly thinking how it could be adapted to Fate Core. I just find the whole concept of approaches a bit weird and think skills which Fate Core uses is more intuitive.

Beside that this was a great book, the setting really comes alive and there’s enough explanation. There’s a whole section about building your own aethercraft/ ship which was really interesting and fun to read. There’s less about building the actual characters, but most of the basics are in the Fate Core book. They do explain the different races and there are enough organizations and issues strewn throughout the book to use as material for a campaign. There’s also an example campaign which can be used as a standalone session or as the start of the campaign.

There’s also an unique magic system. I did like that it introduces another magic system, although I think that section could’ve been a bit longer, some things were a bit vague now and I had some trouble coming up with specific spells or magic uses beside the standard fireball.

To conclude: The Aether Sea is a great setting for Fate and one I certainly plan to try out eventually. The mix between fantasy and sci-fi was well done and I was really intrigued in this world. I like the feel and everything was explained well. The only thing that bothered me a bit was that they use the FEA approaches. One of my favourite settings so far!

You can buy (pay-what-you-want) The Aether Sea here:
– RPG Drivethru

2 responses to “Review: The Aether Sea by Edward Turner”