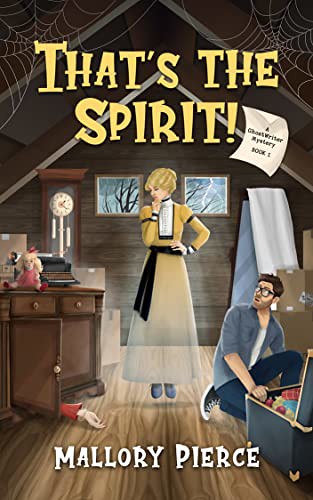 Brought back from the other side by a séance, Gwendolyn Frink has been roaming the halls of her family’s Victorian house for more than a century. She can’t communicate with the living, she can’t leave the premises, and she can’t stand feeling useless.

Enter Nolan Drake, aka the Guru of Gore. Suffering from a wicked case of writer’s block, the best-selling horror author purchases the empty Victorian, thinking a change of scenery from Manhattan to upstate New York might get his creative juices flowing again.

Gwen is thrilled to have a new housemate even when he turns out to be an antisocial, coffee-guzzling grump—spectral beggars can’t be choosers, right?

Nolan is not thrilled when he discovers his real estate agent’s dead body in the attic of the Victorian along with its resident ghost—a very talkative, opinionated ghost who insists on him helping her solve the murder of Morgan Charles.

Can this unlikely investigative duo crack the case so that the streets of Woebrook will be safe for the town’s annual Festival of Frights? Or will they run afoul of the wrong person, dooming them both to haunt the Victorian, and drive each other batty, for eternity?

If you enjoy sassy sleuths and supernatural shenanigans, That’s the Spirit! is the book for you! It’s similar in tone and content to the works of Paranormal Cozy Mystery authors Angie Fox, Erin Huss, and Annabel Chase.

When I first heard of That’s the Spirit! I jumped on the chance to read and review it as it sounded so fun. And that’s exactly what this book was, a fun paranormal cozy mystery book set around Halloween. It was the perfect read for this time of the year too with the Halloween timing and I really enjoyed reading it.

That’s the Spirit! is told from the point of view of Gwendolyn, who is a ghost. She has haunted to Victorian house were she grew up for years now, but finally someone comes along who can see her when writer Nolan moves in. When Nolan finds the dead body of his realtor in his attic he teams up (a bit reluctantly) with Gwendolyn to find the murderer. They also become friends with police officer Bailey who appreciates their insights and lets them tag along to some of her conversations with suspects. I thought this was such an interesting set up with the main character being a ghost and having the story be told from her point of view. It worked really well and I enjoyed the unique touch it brought to the story.

The mystery was a solid one. It was relatively straightforward with not too many suspects, but even so it kept me guessing. I managed to predict part of what happened, but not the actual murderer until it got revealed. I like how Gwendolyn and Nolan can accompany a police officer and help her along as this way the police felt actively involved and it made for a good reason why Nolan could talk to some of the suspects. There are some surprising red herrings and interesting reveals when the secrets came to light about where certain characters were during the murder.

I liked Gwendolyn and seeing her figure out how things in this century worked. Some of her knowledge and word usage are still from the time she was alive, so she has to adjust a bit. Nolan has to explain some modern things to her, which made for some fun scenes. Seeing everything play out from her perspective was interesting and I liked seeing her interact with Nolan. Nolan was a nice character too as well as officer Bailey. There are also some surprising interesting side characters like Nolan’s neighbor who grew on me as the story moved on.

To summarize: This was a fun read and exciting start to this new series. I liked the timing around Halloween. It was unique and fresh to have the main character be a ghost and the way this led her to interact with the world. I liked her interactions with Nolan, who is one of the few people who can see her. The mystery was a solid one and while I guessed part of what had happened I wasn’t sure about who the murderer was till the reveal. I liked following the characters as they investigated suspects and seeing some secrets come to light. Gwendolyn makes for a great main character and I liked following her. I look forward to the next book and would definitely recommend this to fans of paranormal cozy mystery books!

2 responses to “Review: That’s the Spirit! by Mallory Pierce”