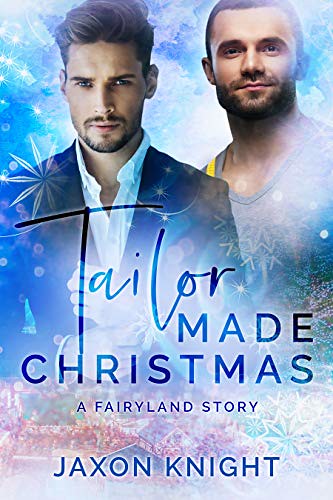 Blurb:
Sparks fly and old hurts flare as two men too afraid of their feelings discover some things can’t be buried.

Teddy loves his job working in the Wardrobe department of a theme park, but his love life needs resuscitation. The last thing he expected was his high school best friend and crush walking in to be fitted for a prince costume.

Art wants to make it big in Hollywood, and getting a job as a handsome prince might not seem like the obvious first step, but if the rumors are true it could be the break he needs. Instead, he comes face to face with Teddy, the one he left behind.

I really like the Fairyland series and this is a fun Christmas themed story set in this series. Tailor Made Christmas shows the romance between tailor Teddy and Art who plays the role of a prince in the Fairyland theme park. The two were best friends and maybe even more until Art left and never got in touch again. Now they meet again in Fairyland and get to find out whether they could be more.

I liked this story. It has a bit of a Christmas vibe, but only a mild touch of it with how they’re preparing for Christmas time at the park. It was fun returning to this world and theme park and seeing some of the familiar characters again. It’s chronologically set after book 4 in the series, but can easily be read as a standalone as well.

I liked Teddy instantly, he just seemed like a good guy and Art leaving like he did really hurt him. Art was a bit harder to warm up to. He seemed very driven to make it big in the film industry, but his life isn’t fulfilling and he isn’t sure what’s missing. Wen these two meet again after years of no contact the sparks fly, but they also have to resolve what happened in the past.

I liked these two together, but would’ve liked to see more of them actually together. It feels like most of what we see are the first few tries to reconnect and they make a few more mistakes along the way. Then everything gets resolved a bit too easily. I thought Art’s change of heart felt a bit quick due to the shorter length of the story, although it did feel genuine and I liked the scenes with him as Prince Diligence.

To summarize: This was a fun short Christmas themed edition to this series. I liked seeing Teddy and Art meet again after years of no contact and find out their connection was still there. They have some obstacles to overcome and make some more mistakes along the way as well. It was nice to see them figure things out. I just would’ve liked to see a bit more of them together. Art’s change of heart felt a bit quick due to the shorter length of the book, but it did feel genuine and I liked the scenes where he is Prince Diligence. All in all a fun addition to this series and I look forward to more in this series.

One response to “Review: Tailor Made Christmas by Jaxon Knight”