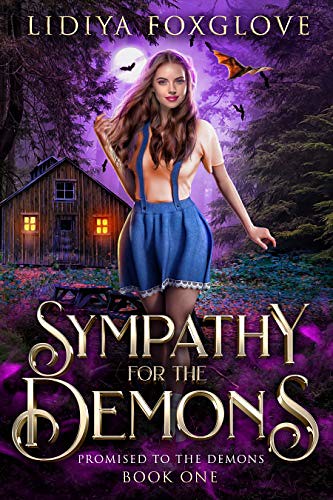 Blurb:
Stuck in a cabin with a demon, a villain, and the bat shifter I love? Nothing a little pastry can’t smooth over…

I was a warlock’s familiar, but treated more like a maid than the magical assistant I was always meant to be. Now I’ve escaped him…and fallen right into the hands of two sexy new masters…

Lord Variel is a high demon who devours souls and binds them to serve him for all eternity. He’s nine hundred years old, eight feet tall, with serious muscles, horns, claws, a castle with a dungeon, and an attitude to match his reputation. But he’s also looking for a bride…and no one is good enough for him. He’s rejected every eligible demoness in the dark magical realms.

Bevan is my true love, a fellow familiar who helped me escape my master. We sealed our bond with an oath—I would be his magic apprentice for seven years—so that I could escape. I just never expected that he would accidentally have his soul devoured by Lord Variel after I made that promise. Now I’m bound to both of them. And I’m worried that Bevan himself is changing, slowly taking on some of Variel’s darkness…

What is a girl to do? I’m determined to free Bevan and myself from Lord Variel’s control…until I learn that an old witch showed Lord Variel a vision of his destined bride…and it’s me.

SYMPATHY FOR THE DEMONS is a medium-burn paranormal romance when you just need to escape into sexy demons, delicious pastries and a sweet and determined heroine! By the way, you’ll just have to keep reading to hear more about guy number three. 😉

Sympathy for the Demons is the first book in a new series by this authors, it’s set in the same world as some of her other series, but can be read as a standalone. I would advice to read at least the Paranormal House Flipper series first as I think the start might be a bit more difficult to follow without it. This was a fun start to this new series and I look forward to the next book.

Sympathy for the Demons is told from multiple points of view, we mostly get Jenny’s point of view as well as two of her love interests Bevan and Lord Variel. In the Paranormal House Flippers series we already got some information about these characters and the plot for this series was set up. I had expected this one to start where the last Paranormal House Flippers book left off, but instead it started a while earlier and went over some of the events in that book again, but now from Jenny, Bevan and Lord Variel’s point of views. This made the start a bit slow for me, but once that part was over it got a lot better.

Jenny/ Celeste was a great female main character. She has been treated horrible by her warlock, but instead of being jaded she’s this bright and happy character. She sees the good in everyone and gives everyone the benefit of the doubt. She’s a bit naive as she hasn’t seen a lot of the world, but this fit her and I liked that she was aware of this too. I also liked reading about her passion for baking and cooking.

Bevan was great too and I liked seeing Jenny and Bevan’s romance develop, they were such a sweet couple and I liked reading about them. Although I wasn’t fully happy with the scene and what was behind it when they finally get physical together. Not their fault, but the fault of one of the other characters, which left a bit of a sour aftertaste. It was fun to see their romance develop and it was clear how much they care about one another.

My opinions about the other two guys are a bit mixed for now, but I think that will change in later books. Lord Variel is a demon who pretends to be evil, but he’s a lot nicer than he likes to believe. Nevertheless he isn’t a nice person by any means. He treats his servants badly, although I think he really does appreciate them too, he just doesn’t show it. He’s a bit grumpy and acts mean, it does feel like there is more behind it and I like how we get glimpses of it. It just wasn’t enough for me to fully warm up to him yet, especially with something he does later in the book. I think we will see some big character development for him first before his relationship with Jenny goes somewhere.

I am not going to spoil who the third guy is as the blurb keeps that a secret too. I wasn’t quite sure of him and we only see a bit more of him later in the book. As I haven’t read the Witch Among Warlocks series and the Finishing School for Fairy Brides series I feel like I am missing some background information on his character. I might pick up those two series eventually. Either way he he has done some bad things and I feel like he will turn things around, but we aren’t there yet. It will be interesting to see what happens to him next.

I am not sure yet how this will turn into a reverse harem, but I am interested to see how things develop in the next book. Bevan and Jenny’s romance is mostly the focus of this one, but the start of Jenny’s relationship with the other guys is set up as well.

I liked how we get to see more of the familiars in this book as well as spend some time in the magical realms. There author has written multiple series in this universe and I do feel like I am missing some background information on some things because I didn’t read all of the series. Nevertheless they are written in a way that each series can be read without previous knowledge. There are certain parts of the worlds and world building that you only read about in other series and it feels like you get a more complete picture if you read the series in the order they are published.

To summarize: a solid start to this new series. I had fun reading this one. I really liked Jenny as a main character, with how sweet and happy she is and how she sees the best in people. I also liked her love for baking and cooking. Her relationship with Bevan was sweet and I liked them together. Bevan was a great guy, but I am not fully sure yet about the other two. The other two guys both feel like they have a lot more character development to go through before they’re ready for romance and they’ve both done some bad things. It was fun to see a bit more of the familiars and spend time in the magical realms in this book. I do feel like I miss some knowledge by not having read all the other series set in this world, but you do get the most important information for this story. All in all a fun start to this new series and I look forward to book 2.

2 responses to “Review: Sympathy for the Demons by Lidiya Foxglove”