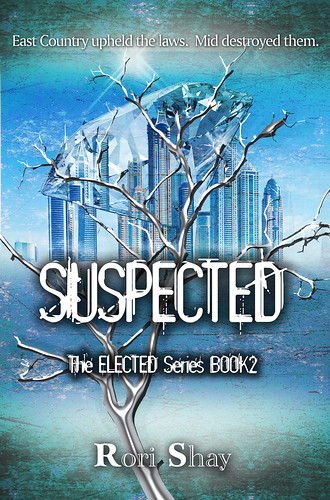 I really enjoyed Elected and was excited to have received an ARC for the second book. In some ways this was the sequel I expected, but in many ways it was also very different. The story went into a direction I wasn’t a fan of and there was one thing that I figured out as soon as they got to Mid country that seemed to take the characters ages to realize. They also do some things that don’t really help their cover and there’s a part towards the end where nothing much happens. There are also fast paced and action filled scenes. I did like getting to know more about Mid country and how people lived there, although it was all bit unrealistic, why did they never rebel? Someone else must have figured it out eventually right? Later on there is a hint that some people do know what’s going on, but they never break free and try to escape or change things? It was just a bit far fetched at times.

While I thought Elected was pretty original, Suspected turns more into the traditional dystopia feel. Oppressive government and bad things, but no one does anything, beside the main characters. Also the plot device about Aloy being a girl wasn’t as important here, it was mentioned a few times, but half of the time I had no clue if people thought she was a girl or a boy and it didn’t really seem to matter. It just seemed that this thing that was so important in the first book played less of a part here.

While I had some issues with the direction Suspected took it was still a great story and I read it pretty fast, there is enough going on that kept me interested and I wanted to know what would happen next. There are also some nice twists that I didn’t see coming.

Then there’s the ending, it’s a bit of a cliffhanger, but I think stopping after the decision would be a better cliffhanger. The scene was drawn out a bit to stop right before she makes her decision.

The characters are in a difficult situation in this book and have to make some though choices, I did enjoy seeing them change due to what they experienced. At the end it felt like Aloy was a very different person then she was in Elected, she was harder and more used to being a leader and making tough decisions. I did like her as a character, but maybe a bit less so then in the first book. Also Griffin and Aloy do some not so smart things once they first arrive in Mid and while they sort of play out right in the end, I think they could’ve handled a few things differently. I felt less connected to the characters in this book, maybe also because there aren’t many likeable characters in Mid, but it just felt a bit distant to me and couldn’t make myself care about what happened to them. Although I did feel bad for Glory his situation.

While the world building wasn’t the strongest point in the first book it takes a turn for the worse in Suspected. It just seemed weird how Mid seemed so developed and Eats not and that this big difference was made in only 70 years. Then there’s the issue that I never felt like I got a good feel for the world and how big it was, it seems that East and Mid where both only one big city, but it didn’t seem possible that only so few people where left. And for all the technology Mid has they still can’t find out the truth, it seemed a bit weird as they could spy on everyone in the city. The there’s the close or maybe it’s a robot and things didn’t made sense at times. I also wish we could get more info about when the accords where made and why they split up the countries. The world building mostly added information about Mid and how they lived, but by providing that info the world building of the whole series seemed even less logical. It also felt like the world was how the author wnated it to be, but it didn’t make sense as to how the world got to that point.

To conclude: Suspected was a nice sequel, not as good as Elected, but it kept my attention and I wanted to know what would happen next. I wasn’t a fan of the direction the story took, but there are some interesting surprises and the ending is a cliffhanger that felt a bit off. I cared less about the characters in this book, but it was fun to see them change. The world building focusses on Mid, but the things we learn make the world building as a whole seem less logical. All in all I did enjoy this book, but it wasn’t as good as the first book in the series.

Other books I read and reviewed by this author:
– Rori Shay – Elected (The Elected series #1) – 4 stars

How important is it to you that the world in books makes sense?