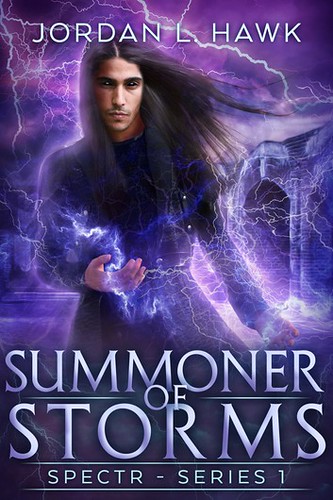 Blurb:
Federal exorcist John Starkweather’s life is in tatters. His best friend Sean betrayed him. SPECTR, the agency he viewed more as a surrogate family than an employer, wants him dead. His only allies are members of the mysterious organization called the Vigilant, whose motives remain in question.

The only thing keeping John together is the presence of his lovers: Caleb Jansen, a powerful telekinetic, and Gray, the vampire spirit possessing Caleb.

Together, they must not only evade capture, but somehow stop SPECTR from building an army of demon possessed soldiers. If they are to succeed, John must question everything he’s ever believed about SPECTR and spirits. And Caleb and Gray must decide how far they’re willing to go—not just for John’s love, but for his very life.

I’ve really enjoyed this series and Summoner of Storms wraps up the first SPECTR series with a bang. After all the reveals in the previous book I was excited to start this one and see what would happen here. This book is a bit longer than the previous ones and it nicely dives deeper into those revelations and also brings more reveals to light. It’s filled with action, as well as some great twists and reveals. And some romance and steam as well. I really like how this series mixes those different elements into a great read.

So much has changed in the last book that I wasn’t quite sure what to expect of this book. They have a new enemy now and have to figure out what’s going on. And now that the relationship changed form between 2 guys to 3 the romance feels different too. Which was all handled well. I also liked how we get to question something a character has done and see the other characters struggle with that as well. Then there are some interesting questions and reveals about what exactly Grey is and the what the Vigilant are.

There is a big showdown at the end and the rest of the book builds on to that. There are some reveals and twists along the way and slowly they figure out what their enemy is up to and then it’s a mad dash to try and stop this plans. There is plenty of action and there’s this big action filled ending to this book and the way things get wrapped up after that was great to read.

I really liked seeing how the romance developed. From the start there have been hints that it might turn into this relationship and it was awesome to see it all get explored in this book. It’s great seeing how Caleb and Gray amicably share the same body now and how there’s no jealously between them. They share John and their body and it goes well. It’s also great to see John fully embracing this and I liked their romance and seeing how it all worked. There’s a bit more steam in this book than in the previous one,s but I thought that fit well with the recent developments and also the big finale of the ending.

This was a satisfying ending to the series that wraps up the main plot lines, ends the romance plot line at a great pace and ends on a hopeful note as they face the rest of their lives. I am kinda curious where the next series will be about as this could easily work as a series ender. So I actually have no clue what the focus on those will be. There is enough open to develop more, but no big things that feel like they need answers now. I enjoy reading about these characters and already bought the second series and look forward to seeing what the characters will face there.

To summarize: This was a great ending to this first SPECTR series. This book is a bit longer than the previous installments and provides a satisfying conclusion to this series. There is plenty of action, as well as some reveals and twists. I also liked seeing how the romance develops and how the characters deal with their new relationship. Gray and Caleb become better at sharing their body and now also share a lover and it was interesting to see how that all worked out. The ending was an exciting tension filled battle. This book wraps up the main plot lines well and could easily work as series ender, but there will be more stories. I look forward to diving into the second series.