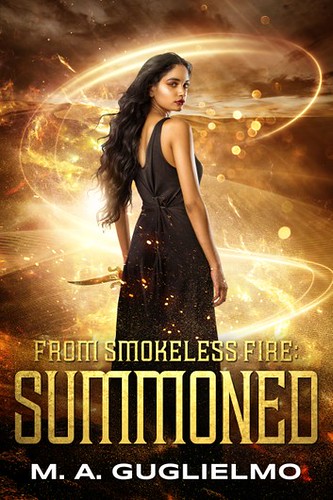 Blurb:
The wrong jinn at the right time, Zahara’s a force to be reckless with

Zahara, party girl of the paranormal, floats up out of a lamp in Daniel Goldstein‘s apartment ready to trick a sorcerer into giving up his soul. But Daniel, whose Moroccan grandmother has reached out from beyond the grave to command him to raise a jinn, wants to do good—by stopping a vengeful fallen angel.

The nymphomaniacal, shopping-obsessed Zahara isn’t the otherworldly ally Daniel had in mind. A do-gooder with a dangerous quest isn’t what Zahara’s looking for, either.

Stuck in a magical contract with each other, the two travel to Morocco, where Zahara’s handsome friend Zaid, a jinn who’s converted to Islam, reluctantly joins their quest. As Daniel and Zaid struggle against jinn-hunting mercenaries and their attraction to one other, Zahara is forced to join forces with the fallen angel’s gorgeous but infuriating brother to stop a cataclysmic war between the human and jinn worlds.

When I saw that cover and read the blurb I knew I had to read this one. I loved the sound of it and I was happy when I got approved on Netgalley and started reading the book shortly after. I think the world the author has created in this series is very well done and I really liked the set-up and parts of the plot, but sadly it failed to entertain me as completely as I had hoped.

The start of this book was brilliantly done, that first chapters was so funny and I enjoyed the dialogue between Daniel and Zahara. It has a bit of that vibe you have in those buddy movies, although sadly I felt like it wasn’t as strong in later parts of the book.

I liked the set-up and was hooked from the start, but somehow as the story progressed I started to lose interest. Where the beginning was pretty fast paced, the pace now seemed quite slow. And on the one hand quite a lot happened and the pace felt slow, but at the same time big events and reveals almost lacked impact. There were also some parts where I would’ve liked a bit more information or explanation as in some cases there was just one line that revealed things and as the reveals didn’t really got the impact I had expected it was easy to forget certain details and who was responsible for what. The intricate plot lines and reveals fell flat for me because of this. There was one twist that was so obvious to me I didn’t get why the characters thought something.

The plot was mostly entertaining, I just would’ve liked the pace to speed up a bit, but the story was interesting to follow, it just felt like the story didn’t progress in a way I found interesting and it felt like it took a long time with less interesting events before they got further. I was curious to find out how they were going to defeat this fallen angel as they seemed so much weaker than him, but still determined. There were also parts where they are fighting those on the same side and this happens multiple times, which felt a bit frustrating as you know they are on the same side.

The characters were likable and or interesting. Zahara probably was one of my favorites with her love for clothes and sweet things and how her whole family are these evil jinn and she doesn’t quite fit in. I enjoyed seeing her slowly change throughout the book and do some good deeds as well. I would’ve liked a bit more insight in her motivations. Her relationship with her mother also was quite interesting. And I liked how she interacted with Daniel.

Daniel is a typical American guy until one day his dead grandma send shim a letter to save the world and call up a jinn, which is how he gets involved in this whole plot line. I actually kinda liked how normal he was. He was very determined, although at times I was unsure why he was so determined to follow this quest.

While the characters were all interesting, I wouldn’t have minded a bit less focus on the plot and a bit more on the the characters, their emotions, their relationships and interactions and what they’re going through. Now it lacked a certain emotional depth at times. Even with the big things they’re going through, it just felt like they just shrugged and continued on.

I also have to admit I expected way more romance based on the blurb than the book actually had. I wouldn’t classify this as a romance book, but an urban fantasy with a hint of romance. As for the romances there are two potential romances. Daniel and Zaid who seem to have mutual attraction, although I couldn’t figure out why they fell for each other. And there are only a few scenes with just the two of them and only one scene plus the end that even felt a bit romantic in nature. I just didn’t feel their romance at all and I would’ve liked to see their relationship build a bit and see why they liked the other.

Then there is Zahara and Hurat. Zahara’s attraction to Hurat was clear and I am glad their romance doesn’t really progress much beyond that as I felt like it fit the plot. They start off as enemies and slowly grow a bit closer and have a bit of mutual regard. The pace which with this progressed was well done.

So with how both those romances progressed or didn’t, it did make this book very light on romance and I had hoped for more romance. And at the same time it makes sense it’s light on romance as they are trying to save the world, I guess I still would’ve liked some more romance as those feelings and emotions don’t always wait for a convenient moment. And I went in expecting more romance, so that didn’t quite mash with what I got.

I did really like the whole idea of jinn, the different factions and powers and everything we learn about them. It did feel a bit confusing at times, but that’s mostly because I know very little about the jinn and while there is world building and explanations it still didn’t quite feel like enough. Or maybe that’s just because I wanted to know more. There were some interesting dynamics and rules here. They also felt a bit demonic here, but not sure if all jinn were that way or only some of them. Then there are the angels or fallen angels and we actually learn almost nothing about what angels are and how they fit into this world. So that was a bit weird.

The setting in Morocco also was quite interesting and there are some scenes and references that make it obvious the author knows quite a bit about the setting. I would’ve liked some more description at times so the setting would’ve come more alive.

To summarize: Summoned has a great concept and I liked learning about the fascinating world of the jinn. The story and the set-up were great, but somewhere along the way I kinda lost interest in the story. The pace felt slow and big reveals lacked impact. I would’ve liked a bit more focus on the characters, their motivations, emotions and relationships. The romance was quite limited with Daniel falling for the jinn Zaid, but there isn’t really any build-up or romance scenes. I didn’t feel their romance sadly. Zahara and Hurat had a mutual attraction, but I actually was kinda happy it didn’t go further than that as this fit the characters and plot better. I liked Zahara’s character with how she was supposed to be evil, but had a soft side too and slowly changes a bit throughout the book. Daniel was just a normal guy, which was interesting to have as a main character. He was very determined to see this quest through, but I had trouble understanding why he was so motivated to do this. I liked the world building and it was interesting to learn more about the jinn, it’s just that I wanted to know even more. The setting in Morocco was fun, although I would’ve liked some more descriptions so it would come alive more.

Tell me about a book you read about the jinn or another lesser known paranormal creature?