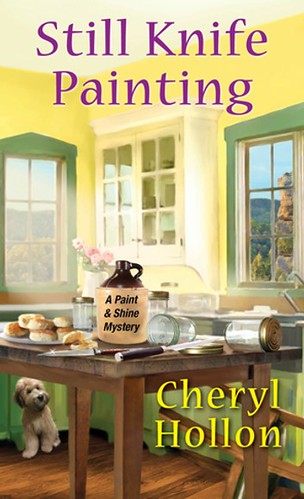 Blurb:
Miranda Trent has set up a sweet life in a scenic corner of Appalachia–until she stumbles across the trail of a killer . . .

After inheriting her uncle’s Red River Gorge homestead in Eastern Kentucky–smack dab in the middle of the Daniel Boone National Forest–Miranda comes up with a perfect business plan for summer tourists: pairing outdoor painting classes with sips of local moonshine, followed by a mouthwatering sampler of the best in southern cooking.

To Miranda’s delight, Paint & Shine is a total success–until someone kills the cook. As the town’s outsider, suspicion naturally falls on Miranda. Murdering the best biscuit baker of Red River Gorge is a high crime in these parts. Miranda will have to prove her innocence before she’s moved from farmhouse to jail cell faster than she can say “white lightning” . . .

I’ve enjoyed this author’s other series and was excited to hear about this new series. I think this was a solid introduction to this new series, but it did feel very much like an introduction book as well and I hope the series gets even better from now onward now that we’re introduced to the main character, location and some of the side characters. I liked the set-up for this one with the painting theme and rural location.

The mystery didn’t fully grip me and I wasn’t as invested as i would’ve liked. There seemed to be plenty of suspects, but for some reason I managed to guess the murderer correctly from the start. The mystery felt pretty straightforward. There is some investigating, but there weren’t as many twist and turns. There were some reveals I hadn’t expected and I couldn’t figure out the motive. The motive is something you only find out later in the book. I thought the mystery was a bit slow to progress as it was intermingled with the other aspects of this book and this is a first book in the series so it had a lot of introducing to do as well. I did like how Miranda, the main character, got involved in the mystery in a way that makes sense. Although the book did suffer from incompetent police agents a bit, which is a trope that i feel is a bit overdone. The county sheriff seemed competent enough, but the team from Lexington that got involved was pretty incompetent, so I am hoping we see more of the local sheriff and less from the Lexington people in future books.

I liked getting to know Miranda. She seemed to care about the farmhouse and wanted to stay there and make her new business a success. I would like to get to know her a bit better, but so far I liked her. She was determined to clear her name and made the best of her business. She has an interesting mix of outsider and insider due to which she doesn’t fully fit in yet, but does have some unique perspective on things. I hope to see more of her painting and her interest in moonshine in the future books as there wasn’t as much of that in this book. I liked the idea of her culture tours and how she incorporated painting, eating and drinking in them.

There are some side character we get introduced to in this book, some of them are clients and tourist from other parts. Some others are local characters and there are some that I expect to see more of in future books. I liked her budding friendship with Austin and even see the potential for a romance there. This book also had a nice rustic country feel and that small town feel.

To summarize: This is a solid start to a new series. I liked the set-up for this series and the focus on painting and Miranda’s new business. It did feel like a series starter or introduction read at times with how the stage is set for the rest of the series and I think/ hope future books are even better now that part is over. The pace and the mystery felt a bit slow at times. I also managed to guess the murderer correctly from the start and wasn’t as invested in the mystery as I would’ve liked. I was curious about the motive as that’s the one thing I couldn’t pinpoint and that was a reveal I hadn’t guessed. I did like how Miranda got involved in the mystery, but wasn’t a fan of the incompetent police officers from Lexington. I liked what we saw of Miranda, the town and the side characters we met so far and I hope to see more of those in future books. I look forward to future books in the series!