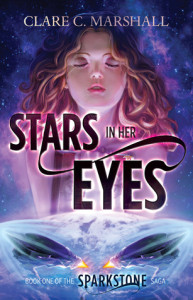 Stars in her Eyes (Sparkstone #1)
by Clare Marshall

Dream your own death.

Welcome to Sparkstone University, where some students are more gifted than others.

When Ingrid learns she’s been accepted at the hyper-secretive Sparkstone University, she is sceptical. It’s an honour to attend, apparently, and yet barely anyone has ever heard of the place.

And everyone seems a little too happy that she’s there: especially when she meets Sunni and her group of friends. They seem to already know Ingrid. As if she was expected. Expected to save Earth from an imminent alien invasion. Like she has superpowers or something.

As if magic and mutations exist. As if aliens are really planning to attack.

That just sounds ridiculous. There’s no such thing.

When I first heard of this book I knew I had to read it the combination of a boarding school and sci-fi elements sounded really original and interesting. It took me some time to finally read this book. After reading it I can conclude the blurb sounds better then this book actually is.

One of the most prominent thughts I had when reading this book was that it would’ve been great as a movie. The book is fast paced and filled with action and there’s hardly time or space for explanations or character development, both things which would be less annoying in a movie. But well this isn’t a movie, it’s a book. I really liked the idea behind the story, but the fast pace of this book made it difficult to let things really sink in. A lot happens and there are some big revelations, but right after those they have to get moving or doing something again and the revelation doesn’t have time to really sink in. I think the author had a great idea, but I think there is a lot things that could’ve been done better. There are just a lot of things that don’t really make sense.

The story started off nice and I liked Ingrid sadly beside those initial few chapters there isn’t really time to get to know Ingrid. And while I liked her, I just wished we would get to know her better. Some thigns annoyed me about her, like how she constantly thought about her boots, yeah I got it the first time those boots are awesome it doesn’t have to get mentioned in every scene. Another thing that rubbed me wrong was that it was indicated she wasn’t really interested in boys, but the first boy she meets with a hot accent, she falls head over heeels in love with after only have met him once.

Beside Ingrid there are a lot of side character, the mian ones being Sunni, Will, Jia and Misty. I liked Sunni, she seemed like a ncie character, if a bit weird at times. I didn’t feel like I got to know Jill and Will enough to form an opinion about them, they seemed nice enough, but I didn’t get a good feel for their characters. And then there was Misty, damn she was annoying, I really couldn’t stand her and how nobody seemed to say anything back to her. She was rude and annoying and agressive and everyone just seemed okay with that because she was Misty. I don’t know, but she just rubbed me wrong.

And then there’s Ethan and some sort of romance, the romance didn’t work for me at all. Especially because this story takes place in a few days and they hardly get to know each other. I just didn’t felt anything between them.

The world building was all over the place. The main big revelation was nice and interesting, although it didn’t make much sense. I felt like constantly there was just too little explanation to really get it and get a feel of why the world was like this. There where a lot of how and why questions that didn’t get answered. Then there’s the issue of the superpowers, while again a nice idea, they varried so much it didn’t seem logical this all stemmed fromt he same thing. And then the explanation with the genes, that didn’t make sense at all. I won’t go into any mor detaisl here, but I just didn’t buy it. I did like idea of the Aliens, but I just wished their actions and reasonings mad emore sense. And the thing about their super powers wa sjust confusing.

To conclude: Stars in her Eyes was an enjoyable, fast paced read filled with action. There wasn’t a dull moment and sometimes I wished there was one so I could let the big revelations sink in. We don’t really get to know a lot about the characters, although I did like Sunni and Misty really annoyed me. The romance didn’t work for me and the world building was confusing and contained gaping open holes. I did like the overal idea behind the story.

You can buy Stars in her Eyes here:
– Amazon
– Smashwords