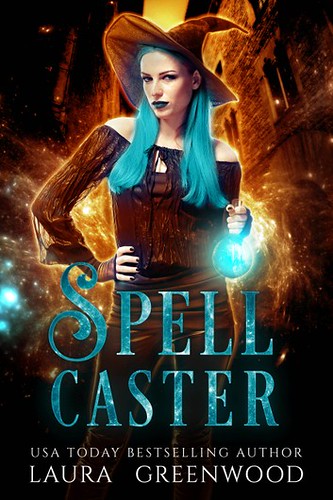 Blurb:
Can magic and science come together to catch a murderer?

Cassie’s world is turned upside down when she’s given an unusual blood sample to test. And when a mysterious man shows up at her lab telling her he has the answers she’s looking for, she’s pulled into a world of murder, investigations, and intrigue.

Finally able to explore the connection between her powers as a witch and her expertise as a scientist to uncover why paranormals keep turning up dead.
–
Spell Caster is an urban fantasy mystery and book 1 in the Paranormal Criminal Investigations series and includes a low heat whychoose relationship.

I’ve been wanting to read one of Laura Greenwood’s books for a while now, I’ve bought multiple of her books, but only read one of her co-written books until now. When I was in the mood for a fast paced paranormal read I picked this one up and it fit my mood perfectly. Spell Caster is a fast paced read set in the normal world, but with all sorts of paranormal creatures who live hidden from the normal humans.

I liked how every scenes had value and added to the story. And at a time where sometimes I could only read a chapter or two of this book, it was really nice to have the story progress with every chapter I read.

Spell Caster is told from Cassie’s point of view. She’s a witch who works at a human lab. One day her boss asks her to test a mysterious sample. After that she’s meets three guys who are investigating a murder and the sample is related. The three guys are also her mates. This book has a mix of paranormal, mystery and romance elements. I thought the balance was done well.

While I like mysteries that keep me guessing, there’s also something to be said for more straightforward plots. The mystery of who is behind the murders is solved relatively easy and it was nice to have them figure that out soon and move on to figuring out the why and where. The why seemed most difficult to solve. I liked how the mystery progressed, but it also felt like it was missing a little something to really grab my attention here. The show down at the end fell a bit flat, but on the other hand I kinda liked how realistic it felt and how smart the characters acted. I also would’ve liked a bit more about the motivation and what the bad guy was doing. The wrap up is quite fast and I would’ve liked a bit more earlier on about what he was doing and why. I think the next book has a different mystery, so not sure if we get more of that.

I liked the set-up for the romance, but for now it’s very much in the beginning stages. Cassie meets the three guys and forms a bit of a bond with them. As they are all mates they have this instant connection which makes things a bit easier, but I liked that besides that they still took time to get to know each other and fall for one another as well. For now I am not really feeling the romance yet, but so far I liked Cassie and her guys. I am curious to see where the romance goes. I liked how we see Cassie spend time with each of the guys and also some scenes where they all work together.

The world building was well done. It’s sprinkled in here and there and I felt like I got a decent feel for the world and am eager to learn more. The world has different councils for different paranormal species and there’s something called the high council as well. I haven’t seen that as a concept before, so that was nice. There clearly are plenty of different paranormal and I liked getting a feel for some of their powers. I hope to see more of Cassie’s magic in book 2, she’s a witch, but I am not quite sure what their powers and limits are. She uses magic a few times, but it’s not a big part of the book. The necromancer powers seemed quite fascinating and unlike I’ve seen before in books. I hope to read more of them. There also is a bit of shifters and vampires and a bit about mates.

To summarize: I liked this fast paced book which combined paranormal, mystery and romance elements. I liked the premise with Cassie helping three guys with their paranormal investigation surrounding some murders of paranormals. The mystery progressed quite smoothly and they found out easy enough who was behind it, it was nice to see a more straightforward mystery, but at the same time it felt like something was missing for me to really get pulled into the story. I liked the characters and the romance from what we’ve seen so far, but I hope to see more in future books. I liked the world building and the whole concept of the different councils and it was nice to see some unique paranormal skills, especially when it came to the necromancer powers. All in this was a good start to this series and I look forward to read book 2.