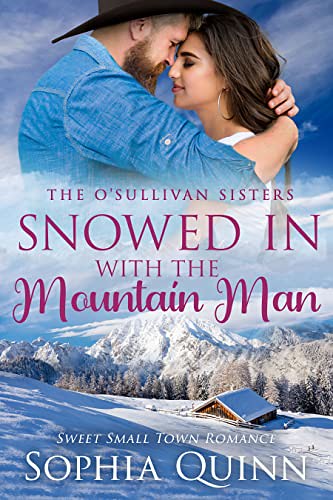 Blurb:
What will it take to crack the city girl’s armor? This gruff mountain man is about to find out…

Dahlia O’Sullivan’s trip to the small town of Aspire was never supposed to last this long. She should be back to her real life in New York City, not trapped on a ranch with the newfound sisters who call her ‘the dragon’ when they think she can’t hear. Not that Dahlia cares what they think. She doesn’t. The sooner she can convince them to sell this property, the sooner she can forget all about her half-sisters, and the ranch, and the irritatingly handsome ranch hand who refuses to be scared off by her bad mood.

JJ is the only person in all of Aspire who’s not afraid of Dahlia, and that’s annoying. It’s also…kind of nice. He might not talk much, but sometimes it’s what JJ doesn’t say that hits her the hardest. Like the way he listens. And the way he smiles when she’s acting a little nuts. Or the way he seems so certain that she’s got a big heart buried beneath all those defensive layers. He’s wrong, of course. Dahlia’s not sweet and kind like her little sister. And she’s certainly not cut out for romance or love.

But JJ disagrees. And when a blizzard hits and the mountain man is trapped alone in a cabin with the fiery city slicker, he means to make her see the truth. That she’s so much more than she knows. And that she belongs right where she is—in Aspire. And in his arms.

I received a free copy and voluntarily reviewed it.

This might be my favorite book in the series so far. I have to say I didn’t really Dahlia in the previous book were we saw her as a side character, but now that we get her perspective I really liked her and understood why she acted the way she did. I thought the author did a great job with that, she’s still the same person, but knowing her side of the story makes all the difference. And JJ was a great match for her. I really liked seeing these two open up to each other and build an awesome relationship together.

I started this book a bit hesitantly, but quickly I grew fond of Dahlia. I felt sad how she had to grow up fast to take care of her two siblings and impressed how she handled it all. I liked how beneath her put together armor she was such a fun character who could really let go and it was so fun to see her watch that first game with JJ and we see more of who she is and what she enjoys doing. I thought she felt very real and I liked seeing the different aspects of her personality. How she struggled opening up to her family and behaving differently than she was used to. Then there was how dedicated she was to her work and how she didn’t really think she deserved happiness. She was such an interesting character and I liked reading about her.

Then there is JJ who is a great character too and he’s just perfect for Dahlia. And Dahlia is good for him too. I really liked how, he was this quiet and understanding mountain men who was very patient. He’s quite the opposite to Dahlia in a lot of ways, where she in impatient he’s very patient, where she likes the city he likes the wold nature. But they have a lot in common too and I liked seeing Dahlia find the beauty in the snowy mountains as she visited it with JJ. I also liked how straightforward and honest these two were. There is no deception or guessing. They both are very straightforward and even when figuring out their romance they quickly go back to being frank with the other once they figure things out for themselves.

I really liked the romance between JJ and Dahlia. I liked how JJ really saw Dahlia even when her sisters didn’t and even when she herself didn’t always realize what she felt. I like how patient he was with her and also how dedicated. He was determined to see what was beneath her armor and show her that she deserves so much more. I really liked seeing JJ and Dahlia spend time together and have fun. At first it’s mostly them spending time having fun together and then when they actually get snowed in and really open up to one another I could feel their romance deepen. There is a bit of figuring things out and I thought that was handled quite well. I liked how when JJ figures out what he wants he shows her. The later scene where Dahlia figures out a few things too was amazing and I really liked seeing how she handled things.

There is less about the other sisters in this book as in the previous ones, but even so there is plenty we see of the first 3 couples which I enjoyed. Emma and Nash are preparing for their wedding, while Rose’s pregnancy is progressing and Lizzy and Kit make appearances too. I liked seeing how all the sisters are doing and seeing how they interact with Dahlia. I look forward to getting to know Daisy in the next book!

To summarize: This was a wonderful and sweet romance. I didn’t really like Dahlia in the previous book where she was a side character, but getting her point of view made all the difference. It quickly becomes clear why she acts the way she does and I thought she was a very interesting character. I liked getting to know her more and see what she did for fun and how much she cared beneath all her though and capable armor. I grew to really like her and her romance with JJ was just perfect. They are such a good match for one another. I loved how JJ really sees her. He’s this quiet and patient mountain men who loves the ranch and it was great seeing him interact with the impatient Dahlia who loves the city. And then seeing Dahlia see the beauty of this place as well was awesome. I liked seeing them have fun together and then open up to one another and the way they had to figure things out. I also appreciated how honest they are with one another. This is my favorite book in the series so far and I look forward to the next one.

6 responses to “Review: Snowed In With The Mountain Man by Sophia Quinn”