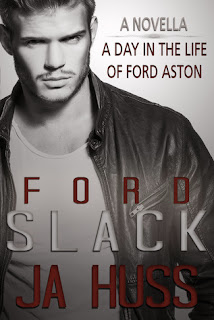 Slack: A day in the live of Ford (A Rook an Ronin spin-off)
by JA Huss


Blurb:
Ford Aston is not too picky about what he wants out of Christmas. He’s not into this holiday—like at all. He doesn’t do presents, or family dinners, or parties, or church.
He does pets. And he’s got one lined up for Christmas Eve. In fact, it’s the highlight of his day. And if he can get through drop-in visits, nosy twelve year olds, an inappropriate conversation with his best friend’s girlfriend, dinner with a family that’s not his, and a party at his mother’s house—well, he might just get home in time to enjoy himself with a stranger and make it all OK.

SLACK: A Day in the Life of Ford Aston, is a prequel to TAUT: The Ford Book, and can be read as a standalone novella.

Ford was a side character in the Rook and Ronin series and I thought he was a really interesting character. And now he will be the main character in Slack and the upcoming novel Taut. This novella shows some of the issues Ford has and things he struggles with. There was also a story line with a character named MarcH in this book which I thought was a bit confusing. I didn’t see the conecting of him and what he did with the rest of the story, but maybe it will make more sense in future books.

In the beginning I was a bit confused by the timeline, I thought this novella took place after Panic, but I found it takes place during Panic I think. This novella has the same epilogue as Panic, so it ends at the same moments as panic. Also I thought showing the epilogue from Fords point of view didn’t really add anything, but I assume it’s for those who only want to read the spin-off and need the information of what happens in the epilogue. I had hoped to hear more about Fords thought behin the events that happen in the epilogue, but there wasn’t much about that.

I like Ford as character, he comes across as anti-social but deep down I think he just wants to be loved and there actually is a soft and nice side to him. This novella shows a bit of what Ford is like and makes me look even more forward to Taut, because I think that’s where the real story is. I think Ford felt a bit different than when we got to see him from Rook’s point of view, although I definitely liked seeing his point of view. He just seems a bit less mysterious now.

We see most of the important main and side characters form the Rook and Ronin series in this book too and get’s Fords thoughts about them. There was also a great new character called Sasha, she was awesome. There is also some set-up for the Spencer book as there is a scene where Ford talks with Veronica about Spencer and Veronica and Spencer their relationship.

To conclude: I really enjoyed Slack, although it’s a bit short due to being a novella and it makes me look forward to Taut. I was a bit confused at first by when this story took place in relation to the Rook and Ronin series and there was one storyline which felt a bit out of place and I didn’t see the significance of it. I hope it makes more sense in the next book. All in all a nice novella which gives us a bit of Ford perspective.

You can add Slack to your to-read list on Goodreads