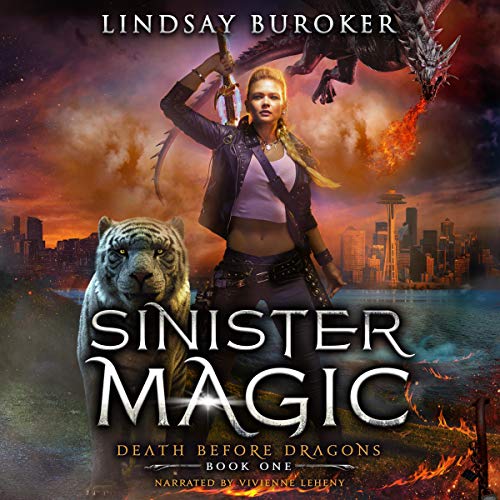 When magical bad guys hurt people, I take care of them. Permanently.

This doesn’t make me popular with the rest of the magical community—as you can tell from the numerous break-ins and assassination attempts I’ve endured over the years. But thanks to my half-elven blood, a powerful sword named Chopper, and a telepathic tiger with an attitude, I’ve always been able to handle my problems with aplomb. Maybe some cursing and swearing, too, but definitely aplomb.

That changes when my boss is afflicted with a mysterious disease, a government agent starts investigating me, and a godforsaken dragon shows up in the middle of my latest job.

I’ve taken down vampires, zombies, and ogres, but dragons are way, way more powerful. And it doesn’t look like this one is going to like me.

Worse than that, he wants to use his magic to compel me to do his bidding, as if I’m some weak-minded minion.

That’s not going to happen. I’d die before being some dragon’s slave.

But if I can’t figure out a way to avoid him, save my boss, and get rid of the government spook, I’m screwed. Or dead. Or screwed and dead. And that’s never comfortable.

Pick up Sinister Magic today to see if I make it. Even if you don’t care about me, I promise the tiger is cool.

I’ve enjoyed Lindsay Buroker’s Fallen Empire series and have been wanting to read more of her books. This series caught my eye when it was released and when I saw the audio version for cheap I decided to listen to this series. I really enjoyed listening to Sinister Magic, it’s an action packed urban fantasy book with an original touch as well as Lindsay Buroker’s typical humor and snark.

Sinister Magic follows the point of view of Val, she’s basically a freelance vigilante/ assassin who kills magical creatures who kill or hurt humans. She’s a half elf and is better at healing and fighting magical creatures because of that. I liked how Val only went after creatures who had hurt humans, but the magical community think of her as a killer and doesn’t look kindly upon her. When her boss falls ill suddenly, Val figures out it has a magical cause and has to figure out what caused the illness and how to fix it. I enjoyed following Val on her journey as she tries to get to the bottom of this.

I liked reading about Val, she’s an interesting character. She seems a hardened cold assassin at first, but there’s more to her. From her struggles with her asthma to the way she seems lonely at times because she doesn’t have anyone close to her because of her dangerous job. I liked how this all made her into a character who felt real. I also though it was a nice touch to see a women in her 40s as a character in an urban fantasy book. I liked how she had a tendency to rush into trouble, but also how she handled most situations smartly and thought things through. She also can be quite snarky. I especially liked her interactions with Sindari, a magical silver tiger.

Besides that there are plenty of interesting side character we meet along the way and I like how all of them had their own personality. From Val’s mom, to Zultan, to Dimitri, to Nin and Val’s boss Willard. I liked reading about them and seeing how they interacted with Val. I also liked seeing a bit of various magical creatures in this book.

I have to say I don’t really like Zav, I think he’s supposed to be the love itnerest or turn into that at least, but in this book he’s mostly rude and arrogant. He’s not very likeable, but there are a few hints that there is more to him, so hopefully that will change in future books. The dynamic between him and Val remind me a bit of the couple in her Fallen Empire series who also start out on opposite sides and with the female being quite snarky.

I like how fresh the world building in this book feels. Usually in urban fantasy you have the typical mages or witches and vampires and werewolves. Those are here too, but basically every magical creature exists, from wyverns to dragons and elves, dwarfs and many more. Then there are portals that bring these creatures to earth. And how earth is basically a planet where they go to hide. I thought it was an interesting take on the urban fantasy genre and it felt familiar and fresh.

I am glad I decide to listen to this one as the narrator’s style fit this book really well and I enjoyed listening to it. The narrator did the different voices for the characters well and I liked how everyone sounded differently. I plan on listening to the rest of the series as well.

To summarize: I had a lot of fun listening to this one. The plot is filled with action and adventure as we follow val as she tries to find out how poisoned her boss and how to fix it. Val is an interesting character and I liked how realistic she felt. She’s not only a badass assassin, but also struggles with mundane things like her lack of friends and asthma. There are some interesting and fun to read side characters as well. I have to say Sindari, the magical tiger was probably my favorite, he’s so fun to read about and I liked the interactions between him and Val. I am not a fan of the dragon Zav yet, but I am willing to see where things go next. I liked the way the world felt fresh with how it was an urban fantasy, but with creatures you don’t see as often in this genre like elves and dwarfs and many more. I am happy I listened to this one as the narrator’s style really fit the book well and I liked the way she narrated this book and did the different voices. I’ll be listening to the rest of the series as well!