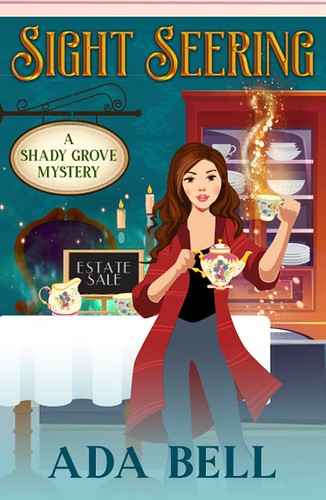 Blurb:
A Seer in the City…

While visiting an estate sale to pick up new items for Missing Pieces, Aly gets hit with a surprise: the elderly homeowner didn’t have a heart attack–she was murdered. Aly’s got the evidence in her hands, and the killer is offering to sell it to her. Time to make a deal, then call the police.

If only anyone believed her. Miriam Peabody was in her 70s and appeared to die of natural causes. Police found no evidence of foul play, but Aly knows what she saw. Worse, she’s pretty sure the killer has powers of their own. As she seeks evidence to support her vision, someone is watching Aly’s every move. They’re always one step ahead. She needs to find concrete evidence to give the police before someone Miriam trusted gets away with murder.

After enjoying the first 2 books in this series, I excitedly dived into book 3. I have to say the start of this one didn’t really grip me, but the further I got the better this book got. There’s a new mystery as well as the overarching mystery about who killed her brother’s wife also continued. There are some interesting twists and turns and I liked seeing how Aly tried to solve these mysteries.

The new mystery in this one didn’t grip me at first. It seemed very obvious, even though I suspected there might be a twist later on. And then the main character investigated in a direction that didn’t seem worth it. A big part of the book takes place on the same day and that also made it feel a bit rushed because of the time pressure they’re under. For a while I just wasn’t enjoying this one as much, but slowly it got better.

During a break in the investigation Aly focuses on the ongoing mystery about who killed her brother’s wife and there are some big developments. I really liked reading about that and finding out more. After that it mostly switches back and wraps up the mystery of this book and there were some interesting twists and turns that were interesting to see play out. Then the epilogue ends things on a suspenseful note regarding the murderer of her brother’s wife and makes me eager for the next book.

I liked following Aly as she tries to solve these mysteries and how she uses her special powers to reveal things. I like how her powers play a role in figuring out who did it. There were a few moments where I felt like she was acting a bit hastily or running into the wrong direction, but luckily she had her boyfriend Sam along for part of this mystery who could calm her down or help her make better decisions. Unfortunately I am still not really feeling their romance, but I liked seeing them spend some time together on page in this book as it helped me get a better feel for them.

To summarize: This was another solid book in this series. I liked following Aly as she solves another mystery. This book didn’t grip me at first as the new mystery wasn’t as interesting and seemed very straightforward. The mystery had some interesting twists and developments later on, but it took me a while to get invested in it. The ongoing mystery about who murdered her brother’s wife had some big developments in this on and I was really excited to find out more about that. I liked how Aly uses her powers to help solve the mysteries. There also are some more scenes with her boyfriend Sam in this one, although I still don’t fully feel their romance. This book takes place in a different place, but later on there are some scenes in Shady Grove as well. I look forward to the next book!