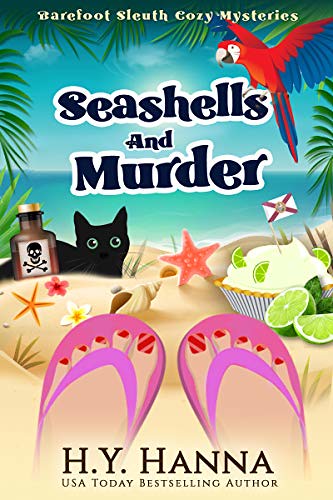 Blurb:
Ellie can’t believe her luck: instead of a dreary English winter, she’s enjoying an unexpected vacation in sunny Florida… and things get even more exciting when she’s roped in to judge the annual Key Lime Pie Contest at her beach resort. The rivalry is fierce, the recipes are daring, but nobody expects the event to end in murder! Before long, Ellie is swapping comfy cabanas and sugar-white sand for some serious sleuthing. She soon discovers that everyone has something to hide. Are the contestants really as innocent as they say? Does the resort chef still hold a vindictive grudge? And what was the victim’s wife really doing on the night of the murder?

Meanwhile, Ellie finds that there are other dangers lurking at the resort, such as being robbed at beak-point by Hemingway the parrot! Then there’s her simmering chemistry with the hunky resort doctor–a distraction she doesn’t need. Help comes from Mojito the resort cat, who has a nose for clues, but it turns out that this mystery has more twists than a conch shell. If Ellie doesn’t solve the case soon, she’s going to find that Florida’s famous pie is really “to die for”…

After reading book 1 I was excited to see where this series goes next. Seashells and Murder is a great sequel. We see more of Ellie and she has another murder mystery to solve at this Florida beach resort where she’s staying for a long vacation. This was a fun read and I liked the mystery.

When Ellie is asked to judge a key lime pie competition she doesn’t expect to get involved into another murder mystery, but that’s exactly what happens. When the celebrity judge dies because of poison the main suspect is the chef of the resort. The two disliked each other due to an event in their past. The resort manager knows his chef is innocent and asks Ellie to help. Ellie is happy to help and dives into another mystery.

I liked this mystery as there were plenty of suspects. Not only do we have to wonder if the chef really is innocent or not, but all the members of the contest might have had a chance to put poison in their pie or maybe someone had access to the pies before the judging? Everyone seems to have a motive or is acting secretive. And I enjoyed following Ellie as she tries to figure out who is innocent and who is the murderer. I liked the twists and turns and finding out what everyone was hiding or what explained their suspicious behavior. I liked the reveal of who the murderer was, it made sense when everything fell on it’s place.

Besides the mystery there are some other interesting developments and Ellie spends some time with her aunt as well as the hot resort doctor. There are also some fun scenes with the resort pets a parrot who repeats things and a sneaky cat. I liked how both pets played a role in Ellie search for answers and how they “helped” with the mystery. The resort setting is a fun setting for a cozy mystery and I liked the baking/ competition theme for this book.

To summarize: this was a solid cozy mystery read and I had fun reading it. The mystery was a good one with plenty of suspects and secrets. I liked following Ellie as she tries to figure out who is innocent and who is the murderer and what everyone is hiding. I liked the reveal of the murderer and how it made sense looking back. The resort makes for a fun setting. And I liked the two resort pets, a parrot and a cat, who both play a role in solving the mystery. There also is a hint of romance with the resort doctor. And it was nice to see a bit more of Ellie’s aunt in this book.

2 responses to “Review: Seashells and Murder by H.Y. Hanna”