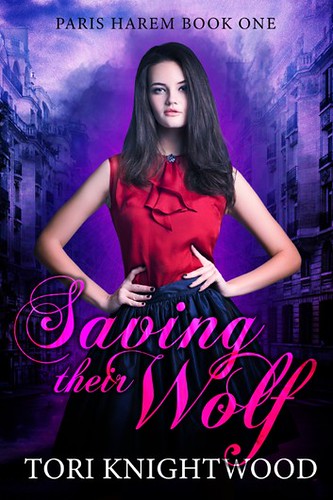 Blurb:
A wolf shifter haunted by her past. Three men who only want her happiness. Will their love be enough to save her?

Catherine Malraux has returned to her hometown of Paris after the mysterious death of her ex-boyfriend. She wants to forget the ordeal, as well as the growing shifter hatred she left behind. Her best-friend-turned-boyfriend is moving to Paris with her, and she can’t wait to see how their relationship develops.

But fate has other ideas. When she meets two new sexy men—Martin, an elephant shifter, and Reid, a wolf shifter—the intense attraction has her reeling. After Catherine has refused lust and affection for so long, three hot men want to love her.

Can Catherine accept that she deserves love before an enemy from the past takes her life?

Having enjoyed some of Tori Knightwood’s other books I was excited to try this series. It’s a spin-off series from her Shifter Hunter series and I am glad I read that one first, although this one can be read as a standalone easy enough as well.

In Saving the Wolf we mainly follow the point of view of Catherine, who just returned to Paris from the south of France. Her boyfriend also moves to Paris. Then on a night out with her cousin Dany she meets two other guys Reid and Martin to whom she has an instant attraction. We get a few short chapters from the point of views of her guys as well

I enjoyed reading this book. It has a similar style to Tori Knightwood’s other books with a fast pace and short chapters that makes it easy to read through. There were some minor things or scenes that didn’t quite work for me, but these were mostly minor things. Once or twice a few inconsistencies that were a bit weird, but for the most part it was a great story.

The focus is mainly of the developing romance between Catherine and her 3 mates, which worked here. There also is a side plot line about an incident form Catherine’s past that continues to haunt her. I understood why she felt the way she did about it, but I also felt bad for her and wish she didn’t blame herself. Only by the end we find out the whole story and things get resolved, it’s a sad piece of backstory, but I liked the way things got resolved.

I am glad I read the shifter hunter series first as there are some recurring characters from that series and this one takes place chronologically after it. I liked seeing Dany and Guy again from the short story as well as the fact that Martin turned out to be one of Catherine’s mates. I liked what we saw of his characters in the shifter hunter trilogy, so it was fun he plays a big role here too. It can easily be read as a standalone.

I was curious to see how the author handled the reverse harem aspect and so far it’s working out for me. There is a bit of drama and back and forth in this book with Catherine having to decide what she wants, but I also felt like this book built a solid foundation of her romance with the three guys. I look forward to seeing how that develops in future books.

I liked Catherine as a main character and look forward to getting to know her better in future books. I think her thoughts and emotions made sense, even though at times I wish she acted differently. I liked how she tries to handle the whole situation with the guys well and also talks with each of them to make sure they’re okay with this. I liked how all the guys had their own personality and how even in a shorter read the author found ways to display their different personalities and give us glimpses of their characters. I felt Catherine’s connection with all of them and I look forward to seeing things develop in later books.

I was a bit surprised to find the concept of mates play a big role here, while in the shifter hunter series we didn’t hear anything about it. I am not a big fan of the whole fated mates concept in general, but it was mostly well done here. I liked how they still have to put in work to make the relationship work and how the appeal/ attraction isn’t only physical.

To summarize: This was a great start to this new series. I like this author’s writing style with a faster pace and shorter chapters that makes it easy to keep reading. There were a few minor things that didn’t quite work for me, but for the most part I enjoyed this book. I liked Catherine and her three guys and how each of them had their own personality. This book mostly sets the basis for their relationship as well a side plot line about some danger to Catherine when something from her past makes a reappearance. I liked seeing the romance develop and look forward to seeing how things progress in later books.

4 responses to “Review: Saving Their Wolf by Tori Knightwood”