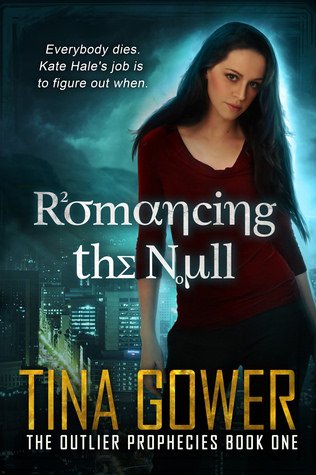 Romancing the Null (The Outlier Prophecies #1)
by Tina Gower

Blurb:
There are three kinds of lies.
Lies the fates spin as half truths.
Lies of destined love.
And statistics.

As a fateless, Kate Hale is immune to the first two, but the third kind of lie is her profession. After spending years as an actuary for the Traffic Department, Kate is promoted to Accidental Death Predictions. It’s all she’s worked toward, and her career is finally on track. But when an oracle delivers an impossible death prediction and insists on her help to solve the case, she might lose any chance of impressing the brass.

Her only hope comes in the form of the police liaison assigned to her department, latent werewolf Ian Becker. Becker can grant her the clearance to find answers, but he’s a wild card with a shady past who doesn’t play well with others.

Every prediction has a loophole, but if Kate can’t solve the case before the crime is fated to occur she won’t just lose her job–she’ll have the blood of an oracle on her hands.

Urban Fantasy and statistics? Yes please! The original concept of this one made me curious and I knew I had to read to read it. I have grown quite fond of statistics thanks to my psychology study and was curious how the author would combine those two things in a book. Romancing the Null was a fun read. It takes place in a world with oracles and predictions and statistics. But when an oracle is predicted to die things turn serious. Due to a bit of a coincidence Kate gets involved and then Becker and they are determined to solve this thing. It’s like solving a murder mystery that hasn’t taken place yet and it was really interesting.

This book started right off with the main plot line. It is very story driven and it’s quite fast paced. The whole story took place in a few days time. Which does make sense due to the time sensitive nature of the problem they’re dealing with. But at the same time it felt a bit rushed almost. Due to that it seemed there was less time for side plots or character development. And it also felt a bit slow at first as we’re missing some pieces of information and it felt for a while like they sat around doing paperwork and calculations and I couldn’t fully grasp what exactly they were doing as it was mostly summed up. Luckily after that things picked up when they leave the house. And then at the end when everything comes together it all speeds up and then slows down again when things wrap up.

I can’t fully explain why, but while I enjoyed this book something was missing that could’ve bumped it up to a 4 star. So it’s more like a 3.5 star rating, except I don’t do half star ratings. It just felt like tiny pieces or details were missing. A few scenes were just a tad confusing, but not so much you didn’t know what was going on. More like these tiny things were missing and I can’t even say what exactly. It just felt it didn’t quite flow right in some places or could’ve used a bit more explanation or clarification in some parts.

Kate is the main character in this book. And while the story was told from her point of view at the end of the book I still felt like I didn’t fully got a grasp on her personality. We do learn some things about her, but there wasn’t as much time for character depth and development and I think that’s one of the things that I felt was a bit lacking in this book. I did like Kate well enough, but I just want to get to know her better. Then there are some side characters; Becker, Mica, Ali and Jack who play a role and anyone besides that only plays a small part. The focus is very narrow due to the way the story is told, but it worked. There is a bit of a hint of a possible romance, but it’s only a hint at this point. Becker was quite interesting and I look forward to see more of him and Kate in the next book.

The world building was probably my favorite part of this book. The concept and the world is so original. I liked the concept of the oracles and how they made these predictions and how the government worked with that and prevented some of these things. The whole society was changed and build upon these predictions. It was really thought through and felt realistic. I liked how this concept of oracles and predictions influenced the whole world and how these people lived and the society functioned. And I just wanted to know more and see more of how this society works.

But there is more than just oracles and at times it felt like there was a bit too much. Every fantasy creature seemed to be real in some sort of another and magic is real too, but very little of that gets explored and because of that it felt difficult to get a grip on the complete world. Then again that’s also a good thing, because I think it would’ve been too much to fit all in one book. So we mostly get the oracles and their predictions with a bit of magic and werewolves on the side.

To summarize: This was a good story driven book where the characters try and solve a murder that hasn’t taken place yet. I enjoyed it and thought the concept was very original with the focus on oracles and their predictions. It just felt that at times something was missing, not sure what. It feels almost rushed with how much happens in so little time and slow at first when they mostly do paperwork. I liked the characters well enough, but would’ve liked a bit more focus on the characters and getting to know them. There is a hint of a possible romance, which seemed promising. The world building was probably my favorite aspect with how unique this world was. It’s really thought through and the oracles and prediction influence how society works. It just felt like there was a bit too much at times, as there’s also magic and paranormal creatures and there’s hardly time to explore that. Which is also a good thing as else it probably would’ve been too much for one book. All in all this was a promising start to the series and I am looking forward to continuing this series!

Links:
This book is free on all vendor sites!
– Goodreads
– Amazon
– B&N
– Kobo

What’s the most original book you read recently?

16 responses to “Review: Romancing the Null by Tina Gower”