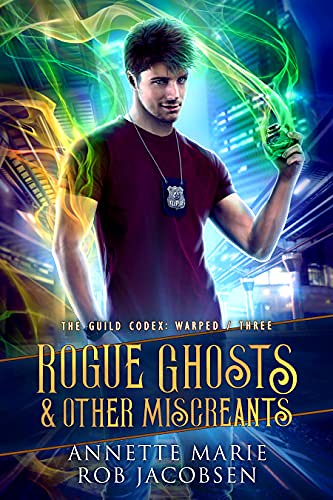 Blurb:
As a former con-artist, I love a convoluted, mind-bending scheme as much as the next guy. But as a recently promoted MagiPol agent, I love it significantly less than that guy.

Especially when the life of a kidnapped teen hangs in the balance.

Between confusing orders and conflicting evidence, this whole investigation has me and my partner, Lienna, spinning in circles. Why is our boss keeping this case off the books? Why is our top suspect, the most notorious rogue in Vancouver, mired in contradictions? And why am I the only one who cares more about the victim than their own ulterior motives?

Everyone wants me to shut up and follow orders, but that’s not my style. I’ll do whatever it takes to save this kid—even if that means returning to my roguish roots.

Rogue Ghosts & Other Miscreants is the third book in The Guild Codex: Warped series and I was excited to see how the series continued. This story again follows Kit, a very unusual magical police agent. I really like Kit as main character, he has such an unique perspective and I enjoy reading about his powers.

In this book Kit and his partner Lienna are tasked to investigate the mysterious ghosts and the kidnapping of a kid. For some reason the plot of this book didn’t grab me as much as previous books, but I still enjoyed the book overall. There are some great developments and reveals and I enjoyed seeing it all play. It was fun to see some characters from the other Guild Codex series like Darius and the Ghost make appearances and see how they interact with Kit and Lienna. The ending was quite interesting too and I look forward to see how things develop in the next book.

My favorite part of this book is probably Kit. He’s so fun to read about and I especially liked how he learned some more things about himself and his powers. I liked how he comes across someone who has a defense against his powers and has to find a way to deal with that. I like how he isn’t a fighter, but instead fights only using his illusion type powers. It’s very interesting to see how he deals with situations. I also like how he isn’t really a good character all the time, he does plenty of not so good things as well. There were a few parts where I didn’t really like how he handled a situation, but I understand why he acted that way.

I also like seeing how Kit and Lienna interact. They have a great partnership, but also hit some difficulties in this book and they both have such different point of views. It’s clear why they both view things the way they do and it’s interesting to see those things clash and also how they try and work things out.

To summarize: This was another great read in this series. I liked following Kit and Lienna around on their next adventure. The plot of this one appealed to me less than the one in the previous book, but the book still kept my attention. There are some appearances of characters we already met in other Guild Codex series, which was fun. I really like reading about Kit and his unique point of view and how he handles things. It’s great seeing Kit and Lienna interact and work together. I look forward to the next book!

3 responses to “Review: Rogue Ghosts & Other Miscreants by Annette Marie and Rob Jacobsen”