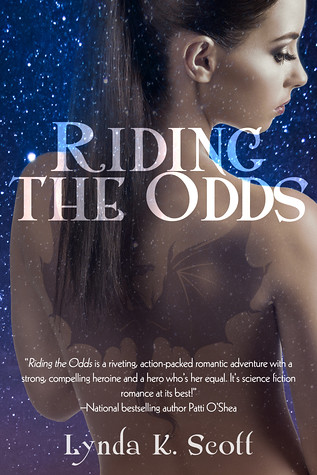 Blurb:
An act of desperation

and the beginning of seduction…

Spaceship captain Tara Rowan has her secrets. One is her Rider, Zie. Zie is an organic symbiote—like a living tattoo—that enhances Tara’s physical abilities, including superhuman strength and reflexes. The other is the past she’s tried so hard to leave behind her. But it’s not until oh-so-sexy Trace Munroe decides to blackmail Tara that she realizes her secrets aren’t so secret after all…

Trace is a Holy Knight who does everything by the book. Desperate to find a missing princess, he’ll do whatever it takes to rescue her and bring her kidnappers to justice. Including blackmail. Yet something about the feisty ship captain draws Trace in and stirs his desire—even if she is a wanted criminal. Because the last thing he needs is any complications…especially when he has his own secrets to hide.

The cover and the mention of a symbiote dragon got my attention to this book and I knew I had to read it. Weirdly enough the whole dragon symbyote thing is also the thing I loved most about this book. All in all it was a fun and enjoyable book and I am happy I read it, but there were all these little issues I had with the story. For example the whole drug plot line seemed a bit redundant to me, it left a bad taste in my mouth and then it didn’t add anything to the story. Then there was the whole we love each other, but we can’t be together thing and they never really talked about it, because while they did have time to have sex, but have no time talk as then suddenly the plot starts moving. And there was a scene involving wildlife that only seemed there to further the romance.

I did like the story, but when at the end we figure out what was going on and it’s just a bit lame. I don’t know I just hoped for more. And while the events were fun to read, the main plot just wasn’t all that interesting. I can’t really explain it better, but while it was fun, it just wasn’t great.

The characters are a fun cast, but Zie, the dragon symbiote was definitely my favourite character. Tara and Trace are both nice characters and I admired some things in them, but I never really cared for them. They are both very loyal and will do everything for those they love. I did think it was a bit weird both their names started with a T, it makes it easier for me to differentiate between characters when they first letters differ. The side characters were mostly that side characters, they had some motives and personality, but not enough to make me really care about them. Beside Zie ofcourse.

I did love the connection Tara and Zie had and it added something very unique to this book. It was definitely my favourite part of the story and if only for that it was worth the read. They have a very unique bond and are like best friends that do everything together and the whole interplay and how Zie could enhance Tara her abilities was interesting. At first I was a bit confused whether Zie was a real dragon, but it becomes obvious soon that she is more a sort of tattoo that can move over Tara her skin, it was very cool and almost makes me want to have a rider of my own.

While this is a sci-fi book I would definitely classify it as a romance first and sci-fi second. The romance was the focus of this book and it was done well with the sci-fi elements in the background. While I liked the romance, I didn’t really feel it at times. And it’s a bit of an enemies to lovers trope, which didn’t completely work for me. The transition was a bit too fast and I just missed the tension between them.

The world building was pretty well done. While the romance is the focus, the sci-fi made a great background and while nothing is explicitly mentioned or explained the world building was interwoven in everything and it made for a sci-fi world I love to read more books in. The sci-fi elements definitely gave this book a nice touch and the whole jump and rider aspects were a nice and unique addition. While I would’ve loved to learn more about this world, there was the right amount of world building for the story and it just fit well with the story.

To conclude: This was a fun and enjoyable read, but I had some issues with it as well, some plot liens didn’t work for me, but in general I enjoyed reading it. My favourite part was the dragon symbiote Zie and her bond with Tara. The world building was also done well, very subtly, but it was still enough to give a distinctive flavour to the world and story. I would love to read more books set in this world as I really liked the setting and the idea of riders.

I haven’t read a lot of science-fiction romances yet, but I would love to read more, so let me know:

8 responses to “Review: Riding the Odds by Lynda K Scott”