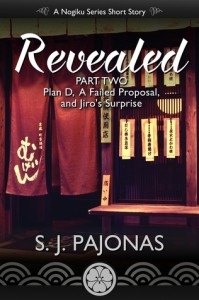 I really enjoyed this second shot story in the Nogiku series. Just like Revealed Oart One this one is told from both Mark and Jiro their point of view. We see another side of the story then in Removed and it was so much fun to learn more about Jiro and Mark. I especially liked learning more about Mark and Lucy their relationship and how it started as there is less focus on that in Released and Removed.

There where some flashbacks, which confused me a few times when I thought they where still in the past while in fact they where in the present or the other way around. But overal this story was quick and fun read. I am looking forward to read the rest

To conclude: This was a fun and quick short story which gives us more insight in Jiro and Mark and show their perspective during some events in Removed.

You can grab your copy of Revealed Part Two for free here:
– Pajonas her store
– Wattpad