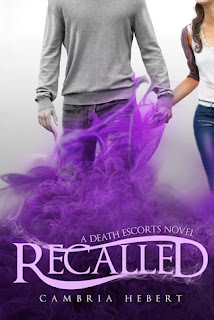 I got an ARC copy from the author for review

Blurb from Goodreads: Love or Death? A simple question really. The choice seems obvious. But. What if you never knew love, what if your life was spent just trying to survive? What if you knew your fate before you were fully grown?

And then you died.

And you were given another chance. A better chance.

And now you are left holding the fate of someone else in the palm of your hand and you have to make the ultimate choice.

My Review:
When I first heard about this book I was really intrigued by the blurb and the awesome cover and I knew I had to read it. The concept is good, but I think the book could’ve been better. My main problem with this book is that it lacks feeling, whatever happened I couldn’t feel it and I didn’t care about what was going to happen. I really liked the idea behind the story and even though the blurb was vague it did sound awesome.

So as mentioned before I thought the story lacked feeling, I like it when reading a book I feel with the characters and care about what is happening. I like to know how the characters feel and what they think and there was just too less of that in this book. Most of the time I had no idea what they were feeling or why they were acting a certain way. This resulted in me not really caring about what happened to the characters. I did want to know how the story ended, because so many things happen that I wanted to know how it all will end and be resolved in one book.

I also think there is too less story, there are so many opportunities for it to be more; more before and more after and more during the story. There were so many times I was wondering things like why and how and I felt like these questions weren’t really answered. The ending was nice and surprised me, but it still fell a little bit flat for me.

The characters basically are characters I could like, but for some reason I didn’t. Piper is a really nice girl who does things for others and cares about them. Dex is a bad boy and soon you get a glimpse of his character that makes him likeable. I think there wasn’t enough insight in the characters thoughts and feelings and I couldn’t understand why they acted the way they did. Also many of their actions were a bit unbelievable and especially with the lack of inside thoughts. Also I didn’t feel the romance, I just didn’t get why these two characters fall in love, because I couldn’t connect with them or get an idea what and why they are feeling.

The thing I really missed in this book was world building. There are paranormal elements in this book, but there is almost no attention for this. I did like the idea of the story and world and I think it was interesting, which is why I wanted to know more about it. At the end of the book I didn’t know much more then I knew after the first few chapters. Even though from the blurb you get the idea it will be a paranormal book, the book really doesn’t focus on this. It is an important part of the story, but there is almost no world building. The basics are there, but not enough details to make it feel real.

To conclude: the concept behind Recalled is nice, but the story fell flat for me. I couldn’t connect with the characters and felt like it all lacked feeling and emotions, I just didn’t feel it. The characters act unbelievable sometimes and there is almost no world building.

Rating: undecided
I have never rated a book undecided before, but I just don’t know what rating to give this book.

Because this book isn’t releashed, here are the links to the author’s page:
– Amazon
– B&N
– Kobo