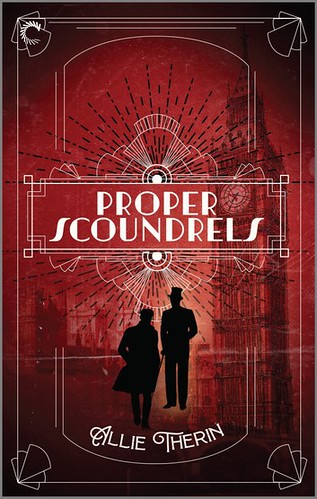 Their scandalous pasts have left them wounded and unworthy—and hopelessly perfect together.

Sebastian de Leon is adjusting to life after three years spent enthralled by blood magic. The atrocities he committed under its control still weigh heavily on his conscience, but when he’s asked to investigate a series of mysterious murders, it feels like an opportunity to make amends. Until he realizes the killer’s next likely target is a man who witnessed Sebastian at his worst—the Viscount Fine.

Lord Fine—known as Wesley to his friends, if he had any—is haunted by ghosts of his own after serving as a British army captain during the Great War. Jaded and untrusting, he’s tempted to turn Sebastian in, but there’s something undeniably captivating about the reformed paranormal, and after Sebastian risks his own life to save Wesley’s, they find common ground.

Seeking sanctuary together at Wesley’s country estate in Yorkshire, the unlikely pair begins to unravel a mystery steeped in legend and folklore, the close quarters emboldening them to see past the other’s trauma to the person worth loving beneath. But with growing targets on their backs, they’ll have to move quickly if they want to catch a killer—and discover whether two wounded souls can help each other heal.

I received a free copy of this book from the publisher through Netgalley.

I really enjoyed this book, it has a great blend with an engaging plot and romance, as well as plenty of magic and a historical setting. I liked how the plot was established early on with a big bad guy whose causing trouble. And then progresses throughout the book as the characters try and figure out how to stop him. Then there is a lot of getting to know the characters and seeing their relationship develop. It made for an engaging read.

Proper Scoundrels follows two characters we already knew from the first series, but I think it’s easy to follow even if you haven’t read that one yet. Wesley and Sebastian have both been through a lot, but both are very different characters. Wesley is grumpy, a bit rude at times and very straightforward. Where Sebastian is still very caring and wanting to help non-magicals, feeds stray cats and believes in the good in people. I liked how they were so different from the other and seeing those two personalities together was great.

I really liked the romance in this book. Their banter is great and I liked the slow burn that then turns into more. I also liked how this time the steam isn’t fade to black as I felt it progressed their relationship and it was nice to read those scenes. I like how Sebastian made Wesley’s world brighter. I liked how Wesley was there for Sebastian. They were so sweet together.

I also liked how we get to see Jade and Zhang again. These two were two important side characters in the first series and I liked seeing them here again. It also made sense why they where in this book. There are a few other side characters, like Sebastian’s sister and brother and a few others.

It was great being back in this world and following two new characters around. I like how one of them is familiar with magic and the other isn’t, which gives a different perspective on the world. It was interesting to see Wesley discover magic exist and how he dealt with it. And how Sebastian was already familiar with this world. There is more magic, more relics and more danger.

To summarize: I had a great time reading this one. It’s the first book in a spin-off series, but I think it works great if you haven’t read that one too. I enjoyed being back in this world for a new adventure. I liked reading about Wesley and Sebastian, they are so different, but so good together. I liked their banter and the nice slow burn romance that then turns into more with some steam as well. I liked getting to know these characters and follow them along as they try and stop the bad guy causing trouble. I really enjoyed this book!