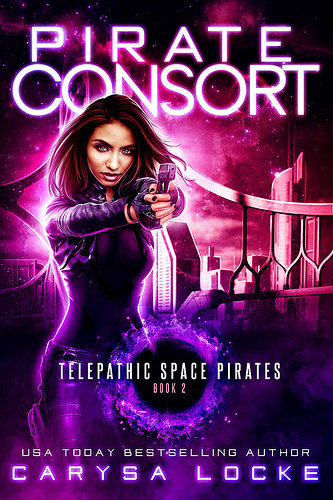 Mercy is no longer a fugitive running for her life and hiding from the family she left behind. She thought the hardest part of going home was going to be surviving the dangerous, psychically gifted pirates she calls family, but the truth is far more complicated, and her relatives aren’t quite as murderous as she remembers.

Now Mercy is their Queen, a role she never wanted. When a peace summit with the pirates’ greatest enemies ends in disaster, Mercy’s new life spins out of control. The Talented people she is supposed to be uniting are on the verge of a bloody war that will only end when all of them are dead.

Her consort, Reaper, is a psychic Killer, a man much more accustomed to taking lives than to saving them. And Mercy has never been responsible for anyone but herself. Now, she must embrace her role as queen and uncover the truth in a complicated web of psychic Talents and politics. If she doesn’t unravel a hundred years of hostility, everyone she loves will die.

After Pirate Nemesis I couldn’t wait to continue the series and see what would happen next. I bought Pirate Consort the day it released and then it took me months before I finally got around to reading it. With how high my expectations were and how long it had been since I read book 1 I wasn’t sure how easy it was to get into this one and if it would be as good as book 1.

Pirate Consort is a great sequel. It nicely builds on the pieces and story parts we got in book 1 already and builds up to some great reveals and an action packaged conclusion at the end. It’s one of those books that get better and better the further you get. Having said that I also thought the start was this book’s weakest part. And the end the strongest.

I admittedly found it quite difficult to get into this book at first. We start with a prologue with reveals the second consort and part of his backstory. I rather would’ve been left guessing who the second consort would be for a bit longer, but it was insightful to have that backstory, if not a very gripping opening. Then the start is very slow and not very gripping somehow and I found it hard to get into the book. I was really happy how the author shortly explained the key players, which helped freshen up my memory, but I do think it’s easier to get into this one if you haven’t read book 1 years ago.

I also had some trouble with the opening scene and the first few chapters. Part of the situation here feels very forced to me somehow. Then there are some parts later on that felt very convenient and allowed the main character to progress very quickly in a way she wouldn’t be able to without that, but the twist that made that possible felt just a bit too convenient for me. It also bothered me a bit how over protective everyone was about Mercy, it was just a bit too much, even while it did make sense why they are so protective of her. I just didn’t fully like it.

Despite my troubles with the start, the further I got in the book, the better it got. And the last 30% or so is very good and had me turning the pages to see what would happen next. The epilogue is great too and makes me excited to see what will happen in book 3. There are some interesting developments plot wise, there are some great twists and reveals.

I liked seeing how Mercy changed and her powers grew in this book. She also becomes more comfortable with her role as queen, which was great to see. I like how these changes are slow enough to be believable and the situation also helps her along. The way she acts feel very realistic and I like how she rises to the challenge and also her her doubts and struggles too. I also liked how she doesn’t change her mind overnight about a second consort, but slowly grew more open to the idea.

Besides Mercy’s point of view there are some chapters form other characters their point of views too. My favorite side character in this book is probably Treon. I like how he has to deal with something that’s quite tough on him and it also shows how much he would do for his brothers. And I have the feeling there is much more to his powers than we first thought. While he can be a tad arrogant (okay maybe more than a tad), with how he get his point of view his personality is much more complex than just that aspect.

This book slowly starts building the reverse harem element a bit. I admit I wasn’t sure this would be RH after I read book 1 until the author mentioned it, but I was curious to see how the author would handle it. Mercy is firmly against multiple consorts in book 1, so I was hoping her change would be believable and I have to say it was. I like how the author took things slowly and while she has her eyes on a second consort, it doesn’t go further than that and doesn’t get romantically here yet. I also loved how she talked things through with reaper first before her feeling grew even stronger. I really like it if people communicate well in books and I like how this was handled.

I wouldn’t have minded it things went even slower with the second consort as it felt now that those few interactions increased the bond between them a lot and while I like Sebastian, I am not fully feeling their romance yet. But I hope that will come in book 3 as he does seem like a great character and I also like how different from Reaper he is. Anyway so far I like how the author handled the reverse harem aspect. I also liked seeing how Mercy and Reaper interact in this book. There are some really sweet and touching scenes between them.

I love the world building in this series for the most part. All the telepathic powers the talented have are so cool and I liked learning even more about it. I just don’t really like the whole queen thing, which unfortunately is a big part of the story and these books. They just seem a bit too overpowered to me and I don’t fully like how their powers work.

To summarize: Pirate Consort was a great sequel with an action packed end that leaves me eager for book 3. The book has a bit of a slow start and I had a bit of trouble getting into the book. The start up situation feels a bit forced and off somehow to me. There also a part that felt a bit too convenient to me. It’s one of those books that get better and better the further you get. There are some interesting development and twist, I did predict one of the reveals shortly before Mercy found out. Mercy is a great main character and I like how realistic she feels. It was great seeing her rise to the challenge and step more into her role as queen, but at the same time she still has her doubts and worries too. I especially liked side character Treon in this book and seeing what he went through in this book added some great depth to his character. The romance between Reaper and mercy was still awesome with some great scenes. I also liked how Mercy slowly warms up to the idea of two consorts. She mostly just gets to know him better and doesn’t get romantically involved yet in this book and talked things through with her first consort first. I liked the slow pace with which this developed. The world building is great and I like all the telepathic powers, but still not a fan of the whole queen thing and the powers a queen has. All in all this was a great book that makes me excited to see where the series goes next.