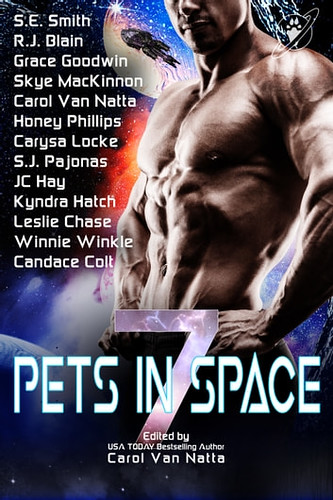 Blurb:
Pets in Space® is back for a new year of adventures!

Pets in Space is back and better than ever! Featuring 13 original, never-before-released stories from some of today’s bestselling science fiction romance authors, starring your favorite sci-fi pets. These furry, feathered, and slightly alien friends are always ready for a new adventure with their two-legged human and alien companions. From dogs to cats to sea creatures and unicorns, these romantic tales show that pets are more than just animals – they’re family.

The Pets in Space 7 authors continue their vital support of HeroDogs, the non-profit charity that improves quality of life for veterans of the U.S. military and first-responders with disabilities.

★ Don’t miss out — grab this limited-edition anthology before it’s too late! ★

I am so excited for another Pets in Space! In this review I share my thoughts about the first 3 stories I read of this anthology. The whole anthology contains 12 stories. I am not reading them in order and just picking the ones I feel like reading.

Myra’s Big Mistake by S.J. Pajonas
This was the first story I read as I was lucky enough to get an ARC copy of this story before release. I always enjoy S.J. Pajonas stories and was excited to read this one.

Myra’s Big Mistake is the second Kimura Sister book and follows another Kimura Sister. I like the set up for this series and how it takes place in the same universe as the Nogiku series and the Hikoboshi series. There are some fun cameo’s from characters from the Nogiku series in this book and it was fun to see what they’re up to, although it felt a bit weird why they wanted to talk to Myra. I had hoped to see a bit more of Suri, the sister from the first book, but she’s only in there a few times.

Myra is a kind and capable character and I liked that about her, but she thinks very lowly of herself and has low self esteem. This made this book kinda though to read at times as she’s so hard on herself. And then everyone around her treats her badly too, which made me sad. Her so called best friend actually isn’t all that nice or a good friend to her for most of the book. And her dad was not a likable character at all, I am still not sure if he will get a redeem arc eventually, but for now he is really harsh and even cruel to his daughters.

I liked the romance between Myra and Nosuké. But I had hoped for a bit more romance scenes and them together. Nosuké is really kind and persistent, but for a long time Myra doesn’t believe he would date her and I feel like there aren’t as many romantic scenes due to that. I felt bad for how Nosuké as Myra didn’t believe him at first and he had to keep proving himself. He sure was persistent and the bonus scenes on the author’s website are great to get to know him better.

I really liked Myra’s skunk pair as well as the racoon from Nosuké. The animals really added something to the story and I liked how Mochi, Myra’s skunk pet, was so supportive of Myra. I liked reading about Mochi. The ending was a great and I really liked seeing Myra grow into herself and accept Nosuké was sincere. I just would’ve liked to see a bit more of that.

I really enjoyed this story. It sorta ties in with Escape From Nova Nine, but can be read as standalone too. I had a bit of trouble remembering who lark was, but luckily Sophia had just re-read Escape From Nova Nine and could remind me of who she was. It was fun seeing more of the griffins and they’re an integral part of the story with how they help Lark and Pim search for the stolen griffins. The start of the book felt a bit abrupt as it takes place just after Lark’s shuttle gets shot down, so it took me a bit of the first chapter to get into the story and get a handle on what’s going on.

I liked reading about Lark and Pim, they both are a bit lonely and Pim is looking for change in his life. Their meeting and time spent together over a few days helps them both decide what they want to do next and they fall in love. I would’ve liked a bit more romantic scenes and a bit of an epilogue or what’s next for them, but I liked the scenes we got where they connect and we see their feelings deepening.

There are also a bunch of side characters and a colorful cast of animals, mostly griffins. I liked reading about the griffins and the way they interact with Lark and Pim as well as some of the kids that help Lark out on the farm. The animal affinity minder talent as well as Pim’s talents are great to read about and I liked what they added to the story.

Healer’s Heart by Carysa Locke
I really like Carysa Locke’s Telepathic Space Pirates series, so I decided this one would be the next story I tackled. Again teaming up with Sophia to buddy read this one. It was awesome returning to this universe and I liked reading about Nayla. I already read Pirate Festival which also features Nayla, although I had forgotten some of the details I could still easily follow this one.

Nayla is working with the talented pirates called killers when Dem asks her for her help and she gets called away to another planet to help with a problem there. I liked seeing how Nayla dealt with everything. It also was fun to see Sanah, Dem and Tamari as well as Rasala again. Nayla hasn’t seen the man she has a crush on for a while and they have some things to sort through. I liked their romance, although most of the basis for their romance has been made before this, but this book deepens their relationship. I liked we got some chapters from Ari’s point of view as well, which helped udnerstand him. I thought the struggle of the killers with their emotions was interesting to see and how some of them develop emotions and empathy now.

I really enjoyed this story and reading about this world and the characters again. The talents are great to read about. This story wraps up the plot that got introduced here, but I would love to see how things progress after this and how their idea works out.