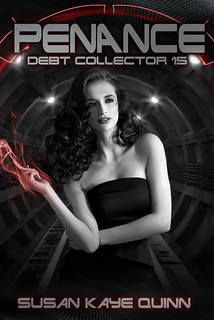 Blurb:
HIS IS SEASON TWO OF DEBT COLLECTOR*
Recommended: start with Season One.

Wraith is alive… but she quickly finds out there’s a price to be paid for living.

Penance is approximately 12,000 words or 48 pages, and is the sixth of nine episodes in the second season of The Debt Collector serial. This dark and gritty future-noir is about a world where your life-worth is tabulated on the open market and going into debt risks a lot more than your credit rating.

Penance mostly deals with the aftermath of the last episode and sets the stage for the last 3 episodes. I enjoyed this episode less then the earlier ones, not sure why exactly. Wraith is still alive and finding out about the price she has to pay. There’s a scene where Wraith really shows her wits and hopefully manages to outwit Moloch.

The scene towards the end shows the true extend Moloch will go and it turn also a bit of Wraith’s personality. The twist at the end surprised me, but now that I think about it, it follows the same pattern as the first season. I am curious what will happen next and if Wraith will get a happy ending.

We see a bit more from Wraith and Zachariel, although I really wonder how deep Wraith her feelings go for him. She cares, but I never got a feel exactly how much, although the scene at the end does show a bit. I really wonder what’s going to happen to Wraith her friends now they got caught up in this. We also meet a new character, not sure how big a role he’s going to play, but I did like him. Ishtar surprised me in this episode and I am wondering whether she has a nice side after all or if it’s all an act. I can’t get a feel for where her loyalties lie.

To conclude: My least favourite episode so far, but still interesting. It deals with the aftermath of the last episode and sets the stage for the rest of the season.

You can add Penance to your to-read list on Goodreads

You can buy Penance here:
– Amazon