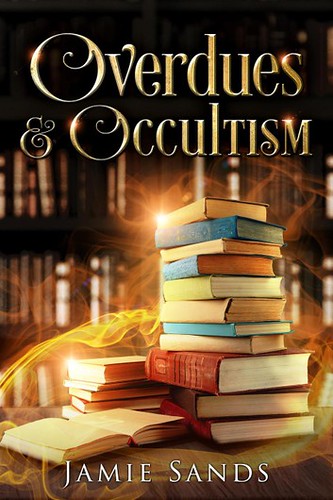 Blurb:
A witch in the broom closet probably shouldn’t be so interested in a ghost hunter, right?

That Basil is a librarian comes as no surprise to his Mt Eden community. That he’s a witch? Yeah. That might raise more than a few eyebrows.

When Sebastian, a pararnormal investigator filming a web series starts snooping around Basil’s library, he stirs up more than just Basil’s heart.

Between Basil’s own self-doubt, a ghost who steals books and Sebastian, an enthusiastic extrovert bent on uncovering secrets, Basil’s life is about to get a lot more complicated.

Having enjoyed some of Jamie Sands books under another of their pen names I was excited to pick this one up. Overdues and Occultism is a sweet paranormal romance story. It is told from the point of view of Basil who is a witch and head librarian and one day he encounters Sebastian who wants to film in the library looking to see if it’s haunted. What follows is a bit of a mystery with a poltergeist they encounter and they have to figure out how to deal with it and try not to fall in love along the way.

This was a quick read and enjoyable read. I liked reading about Basil and how he grew to like Sebastian. I liked their romance, although it’s still very much in the beginning stages at the end of the book. I would’ve liked to see a bit more of the characters and their romance, but luckily there will be more books about these characters as the author just released book 2.

I didn’t really care for the story about the ghost at first, but I thought the reveal was very interesting and the way it got resolved was satisfying. I guess I just would’ve liked a bit more build up to what was actually going on with the ghost instead of some random ghost activity that didn’t really go anywhere and when it does they immediately solve it.

There isn’t really a lot of world building or details about the paranormal, so it was hard to get a feel for what is possible and what not. Basil is a witch, but he doesn’t really use his witchy powers at first, so I wasn’t quite sure what being a witch entails and even when he does use his powers I didn’t really know what the extend of his powers were.

To summarize: This was a cute and quick read with some romance and some paranormal elements. I liked reading about Basil and seeing them grow closer. The setting in new Zealand was a nice touch. I would’ve liked to see a bit more of the characters and their romance, but luckily there will be more books about them. The story plot about the ghost didn’t really pull me in at first and it didn’t really go anywhere till the reveal later on when they resolve it right away too. I did end up liking the reveal and the story of why the ghosts was there was touching and a bit sad. All in all I had fun reading this one and look forward to the next book!

2 responses to “Review: Overdues and Occultism by Jamie Sands”