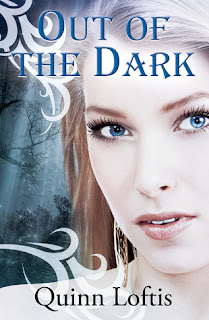 Out of the Dark (Grey Wolves #4)
by Quinn Loftis

Blurb: Darkness has descended on the Transylvanian Alps.
Four packs of the powerful Grey wolves – in a rare show of cooperation – had joined together here in an effort to help their pack members find true mates. Then they were betrayed by one of their own – an Alpha hell-bent on becoming the most powerful of the Canis lupis. And though the wolf’s assassination attempt on the currently-reigning Romanian Alpha failed, his plans to get Decebel, the Romanian Beta, out of the picture were coming together even as his treachery was discovered. The wolf fled, leaving destruction, death, and a missing mate behind him.

Unbeknownst to the other packs, the wolf has employed a witch to finish the deadly job and help him gain another tool to increase his power. A curse of devastating proportions will cripple Decebel in a way that may dissolve his fragile bond with Jennifer. Meanwhile, injured and alone, Jen has been fighting for her life. She had come to terms with her fate, accepting that she would not share a life with Decebel, until help came in the most unexpected form…

Vasile will have to use all his resources – including Sally, the new gypsy healer of the Romanian pack – to discover a way in which to destroy the witch, lift the curse from Decebel and reunite him with the one woman who makes him whole, and solve a mystery that’s been surrounding the Romanian pack for 300 years.

My Review:
It’s been some time since I read the third book in this series, but as soon as I picked up this book I was back in the world of the Grey Wolves and enjoying every second of it. The Grey Wolves series is one of those series I can’t help but love because the stories are just so enjoyable. I have some small issues with the story and pov’s, but I still love this series. I love reading more about Jacque, Jen and Sallie and the werewolves.

The story takes of soon after where the third book ends, but even though it had been some time since I read the third book I got inot the story pretty quikcly again. I loved reading about Jacque, jen and Salie again. I like the different perspectives, although now I did realize how annoying the pov switches or actually lack thereof can be. I don’t remember noticing this as much in the first three books, but sometimes while reading this book I was really wondering who’s pov it was and how the pov can change in the same sentence is a bit confusing at times. This did get better as the story progresses or maybe I just got more used to it. Also the story is fast paced, there is always something happening and often more than one thing. There aren’t many dull moments and I just wanted to keep reading.

The character in this series are just awesome, we get to know a whole lot of characters and the author still manages to give them all their own personality. Although there are also some character who don’t play a big role, there is still a big cast of characters in this book. Sometimes the characters act a bit unbelieveable and I also had the urge to shake some sense into Jacque, Jen and their mates a few times. Sometimes the alpha males are a bit overdone and act too protective and possessive without even thinking things through and Jacque and Jen sometimes seem to act just to aggitate their mates, which get’s a bit old sometimes. There are also some nice character developments in this book, I liked seeing Salie grow and get a bigger role in the story. The story also contains some sweet moments and I liked the relationship developments.

Eeven though this is already the fourth book in this series, there is still enough world building. So many new things and some bits are added in this book to the world building. We learn more about Healers and Witches and even a completely new species is introduced. I love how this series adds world building even this far in the series and still managed to make it believeable.

To conclude: a very enjoyable series. The story is really good and fast paced. I love the characters, although they also can be a bit annoying at times. I also think it is great how there is still so much world building this late in the series and how the author still manages to make it believeable.

Buy this book on:
– Amazon
– B&N
– Kobo
– Smashwords
– The Bookdepository