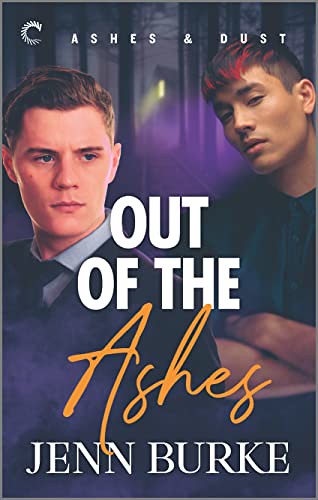 Blurb:
Don’t miss the conclusion to this riveting and romantic spin-off series from Jenn Burke, author of Not Dead Yet.

Some bonds weren’t meant to be broken.

Vampire PI Evan Fournier has dealt with his fair share of danger and heartache, but nothing prepares him for the pain of a broken bond with his mate—especially when his mate is the one who severed it. Bond or no, he still loves Colin—fiercely. Trust, however, is harder to come by. And when a demon starts terrorizing paranormals in Toronto, trust in one another is exactly what they’ll need.

Former firefighter turned crime-fighting phoenix Colin Zhang knows who Evan was—is—to him, but he doesn’t know if he can give him what he wants. He just needs a little time to figure things out. Unfortunately, bringing down a demon bent on mass murder leaves little time for anything else.

The only way they’ll destroy the demon is by teaming up with an unlikely partner to infiltrate a gang of terrorists. But the only way they’ll save themselves is by finding a path back into each other’s arms—and hearts—once again.

I received a free copy through Netgalley and voluntarily reviewed it.

Out of the Ashes is the third and last book in the Ashes & Dust series and I have to say I was a bit afraid to start this one. After the twist of book 2 and knowing this was the last book in the series I wasn’t sure what to expect. Luckily I shouldn’t have worried as I really enjoyed this book. Out of the Ashes wraps up the overarching main plot line of this series as well as the romance plot line and it was a satisfying ending to the series.

Evan has a lot to deal with in this book, after the big event at the end of book 2 his romance with Colin is set back and Evan struggles with this. Then there is the plot line where they’re trying to find out who is responsible for an attack on the paranormal community and they have to go undercover to solve it. With the romance troubles I had expected a lot more drama and I am glad that wasn’t the case. It was still sad and it’s clear how much Evan struggled with it, but there was plenty of other things going on so it didn’t overwhelm the plot.

The plot is well paced with plenty of going on and it was great seeing how it all played out. There are a few twists and turns. As well as a nice showdown at the end. I enjoyed reading it. I really like seeing all the familiar characters from this series as well as the first series this one is a spin off from. It makes for a great read seeing more of the characters I already like and seeing how they’re doing now.

While the romance starts off on not the right foot I liked seeing how things progressed and how they resolved this. I felt they got through this even closer than before and it was great seeing them build this relationship together. I thought the epilogue was great and I also liked seeing which direction their lives went.

I like Evan as main character and it was great seeing how he dealt with the challenges that came at him in this book. I thought the author handled Evan’s depression really well, it’s definitely a part of him and he still struggles with it, but you can also see his progress. I also appreciated how we don’t get pulled too deeply into his depressive thoughts and the episodes don’t take too long.

To summarize: I really enjoyed this series ender. There is plenty going on with a bad guy they need to catch as well as romance troubles. The plot is a solid one and I liked seeing how it brought the plot lines form the previous books together and wrapped it all up. Plenty of action and tension as well as some interesting twists. I like reading about Evan and he makes for a great main character. I thought his struggle with depression was realistic, but also didn’t overtake the plot. Romance wise I liked how it didn’t have too much drama, but still had some things they needed to work through. I liked seeing these two grow even closer and resolve things. The epilogue was awesome and I really liked the glimpse of their future lives. All in all I really enjoyed this series and look forward to what Jenn Burke is writing next!

2 responses to “Review: Out of the Ashes by Jenn Burke”