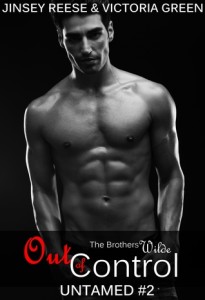 Out of Control (Untamed #2)
by Victoria Green and Jinsey Reese

But she’s not the same girl anymore. Now, at twenty-two, Reagan has big plans to change her life, and it all starts with a trip to Europe. Instead of heading into Harvard Law like her parents had planned, she’s crossed the ocean to follow her dreams in the art world. Her dreams. For once.

A chance meeting in Paris brings Reagan and Dare face-to-face again, but is it serendipity…or penance? A chasm of unspoken hurt stands between them, but they can’t fight the passion they have for each other. And now that she’s found Dare again—the one person in this world who makes her feel whole—she doesn’t want to let go. Problem is, she may not have a choice.

After finishing Untamed I just had to know what would happen next and started Out of Control. And now after finishing Out of Control I can’t stop thinking about these characters, there is a lot of drama in this book and everythign that can go wrong goes wrong, but the story is so addictive and I keep routing for Ree and Dare, they deserve to be together.

Out of Control is just as good, maybe even better, then book 1 Untamed. We take a switch 3 years in the future and things have changed so much, Dare and Ree haven’t seen each other since the last book and Ree is finally taking control of her life and trying to escape the influence of her horrible parents. So she flies to Paris and hopes to start anew there. And then she meets Dare again. I really liked the direction the story took, until the end. The ending took a turn for the worse and I think these authors enjoy leaving the readers with sort of cliff hanger endings, where you want the next book now. The ending is like an accident waiting to happen, you know somethign is going wrong and you can’t do anything to stop it. And then when I finally found out what was going on, it was even worse then I expected. I just couldn’t believe parents would do that to their child, it was just so mean and the timing so unfair.

I really liked seeing how much the character had changed and continue to change and I was so happy for Ree that she was finally trying to get free and start her own life. I also liked all the talk of art that was interwoven into this story and it was obvious how much art meant to Ree. It was so great to see her surrounded by and being involved with the thing that made her happy. There is much more focus on Ree then on Dare in this book and I wished we would’ve learned more about what had happened to Dare in those past few years.

The romance was done really well, although at first it was so frustrating, seeing them push each other away and then not and then being cold again. I just wished they would talk some things out and explain as it seemed that would solve some things. The sex was hot and I kept routing for Ree and Dare. I want them to be together and everything seems to stand in their way and try and prevent them to be together. Really everythign that can go wrong does go wrong and that ending makes me want to read the next book now!

To conclude: I really liked Out of Control and I keep thinking about these characters. I want Ree and Dare to be together, but everything seems to stand in their way. I liked how much Ree changed and how she was trying to stand up for herself, although I wished she explained some things better to Dare. I can’t wait to read the next book in this series!

You can add Out of Control to your to-read list on Goodreads.

Other books I read and reviewed by these authors:
– Victoria Green and Jinsey Reese – Untamed (Untamed #1) – 4 stars

2 responses to “Review: Out of Control by Victoria Green and Jinsey Reese”