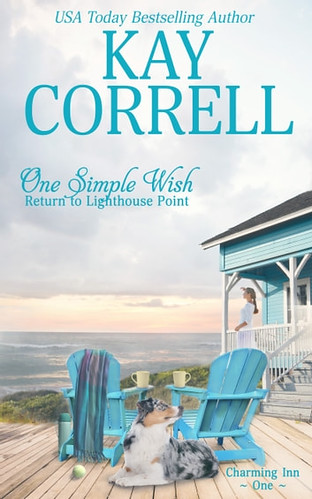 Blurb:
Sometimes not everything is exactly as it seems…

When her aunt is injured, Sara hurries back to Belle Island to help out at Charming Inn. She’s sure she can run the inn and work remotely for her job back in Boston. If only she can juggle all of it…

But what are the chances she’d run into Noah McNeil after all these years and what is he doing on her island? He disappeared from her life in Boston without a word over twenty years ago. And now he has a dog? He always swore he didn’t have time for pets…

But maybe, just maybe, Noah isn’t quite the man she thought he was.

Join these three best friends and the familiar people of Belle Island in this delightful spin-off of the Lighthouse Point series.

I grabbed One Simple Wish: Return to Lighthouse Point when I noticed it for free on vendor sites. It sounded like the type of read that fit my current mood with the main character returning to her hometown years later. I picked it up and on a whim I started it shortly after it. One Simple Wish is a light and fun romantic read with a bit of a finding yourself plot line added it. I read through this quickly, but the romance didn’t quite work for me and I would’ve liked a bit more depth which turned this into a 3 star read for me.

I’ve been enjoying books lately with plot lines like this where the main character returns home and/ or has to figure out what they want in life. Sara has worked long and hard at her current job in the hopes of getting promoted to partner at the firm. She is clearly a workaholic at the start and has no life/ work balance to speak off. She even works during most weekends. Then her aunt takes a nasty fall and needs her help. Sara immediately drops everything to be there for her aunt and while she’s visiting her hometown at belle Island she’s reminded of how much the loves this place. Add in her two best friends Charlotte and Robin who are back on the island too. And then she runs into her past lover Noah as well.

The theme and vibe of this book was exactly what I was in the mood for. This was an easy and quick read and I read through it smoothly. Which was great, but at the same time I missed a bit of depth. I wanted to see more of Sara’s struggle between the life she build these past 20 years and the life she could have at Bella Island. In fact if not for a comment from one of the side characters she might’ve just gone back to her current job and left the island. It just kinda felt like she didn’t really think about things at all.

My main issue with this book is the romance. It’s a second chance romance and when I found out the reason why they separated the first time and the way they handled that conversation I was tempted to DNF it on the spot. It was just such a stupid way things ended between them, add in a lot of pride, some weird decisions and coincidences and I just couldn’t believe that was what got them separated and if that broke them up I had no hoped for a future for them. Luckily they do end up learning from that lesson, I was especially impressed with the way Noah handled things all the way toward the end. Although I am sad that Sara was totally committed to making a big mistake and would have made it if not for Noah.

With the set up I had a hard time really feeling their romance, although once they got over their initial shock there were some nice scenes between them. I just didn’t really feel their connection and understood why they fell for the other. It also seemed like Noah had developed a changed a lot in their years apart and found himself, while Sara hadn’t.

There is a nice group of side characters surrounding Sara with hints of possible romances for future books. We even get a few chapters form the points of view of Sara’s friend and even her aunt Lil, which was a nice touch.

To summarize: This was a lighthearted and quick read set at a beach inn on an island. I liked the theme of workaholic Sara returning to her home town on the island and finding herself surrounded by things she missed. I would’ve liked a bit depth and insight into Sara’s though processes and what being back here did to her as now her decisions at the end seemed quite sudden and more spurred on by a side charter’s remarks to think about what she wanted. There is a nice group of side characters and I liked seeing them all help each other. There are hints of future romances as well and we even get a few short chapters from the side characters. Unfortunately I really struggled with the romance in this book. I couldn’t get over the ridiculous turn of events that caused them to separate the first time. I didn’t really feel their romance or why they fell for the other again. Then there is the whole lack of communication and almost making stupid mistakes at the end that had me rolling my eyes. Luckily it got resolved quickly with minimal drama, although I was a bit disappointed that it was only Noah who realized he had made a mistake. All in all it was a nice read with a theme that fit my reading mood, but it failed to fully engage me.

3 responses to “Review: One Simple Wish by Kay Correll”