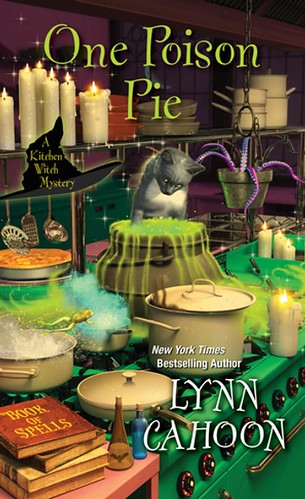 Blurb:
In the first in New York Times bestselling author Lynn Cahoon’s Kitchen Witch series, Mia Malone is starting over in Magic Springs, Idaho—where murder is on the menu . . .

What’s a kitchen witch to do when her almost-fiancé leaves her suddenly single and unemployed? For Mia Malone, the answer’s simple: move to her grandmother’s quirky Idaho hometown, where magic is an open secret and witches and warlocks are (mostly) welcome. With a new gourmet dinner delivery business—and a touch of magic in her recipes—Mia’s hopes are high. Even when her ex’s little sister, Christina, arrives looking for a place to stay, Mia takes it in stride.

But her first catering job takes a distasteful turn when her client’s body is found, stabbed and stuffed under the head table. Mia’s shocked to learn that she’s a suspect—and even more so when she realizes she’s next on a killer’s list. With Christina, along with Mia’s meddling grandma, in the mix, she’ll have to find out which of the town’s eccentric residents has an appetite for murder…before this fresh start comes to a sticky end. . . .

After reading the prequel to this series I was looking forward to reading book and when I was in the mood for a paranormal cozy mystery book I decided to pick this one up. One Poison Pie starts like a typical cozy mystery the main character just moved to a new town, leaving her cheating ex behind and starting her own business. And then there is the dead body ofcourse.

This book started off good, I liked the cooking theme and seeing Mia make a new start in life. I liked how she had a close bond with her grandma and also had a roommate. Then there is the dead body and Mia is a main suspects, her ex is showing up and a competitor for the building Mia bought is determined to make her sell. I liked that there were multiple things going on besides the mystery. This book had all the ingredients for a great cozy mystery, but unfortunately this book didn’t work for me.

I considered DNF’ing this book, but by then I was far enough in the book I figured I might as well finish, but in the end I wish I had just DNF’d it. At the start I was still liking it well enough, the writing style was decent enough and I liked the set up for the different plot lines and wonderign whether certain mysterious events where connected or not. Sadly the issues I had with the book are the kind that kinda get worse the more you read and by the end of the book I was just happy it was over.

The mystery fell flat for me unfortunately. There’s a decent set up with an unlikable character being killed and Mia being one of the main suspects. Which both gave Mia reason to get involved and it which would give plenty of people motive, which I figured would make for an interesting mystery. Sadly it wasn’t. For some reason the book never dives into other possible suspects and motives or even what happened or what clues are there. For that matter Mia hardly looks into the mystery. There is not much of trying to solve the mystery and the only reason she does is mostly by coincidence. Mostly she tries to stay save and focus on her business and own problems.

I would’ve liked to see Mia more actively involved in trying to solve the mystery. There is an interesting twist related to a side character involved in the mystery toward the end, but by then I had already lost interest. Then the climax scene at the end felt very anti climactic and Mia did something not so smart there whcih made me annoyed, compounded by something not working just when she needs it to.

Besides the mystery, there’s the issue with Mia’s ex as well as a competitor who is angry she got the building instead of him. Neither of these plot lines were particular interesting to me either. I do feel that with the whole ex plot line it helps to have read the prequel novella as I am not sure if the book gives the reader enough information if you haven’t read it. I sure think reading the prequel helps get a better understanding of some side plot lines regarding Mia’s cat, Christina and Mia’s ex.

While there is plenty going on the book mostly felt like a slice of life type of story. The mystery mostly takes a backseat and Mia doesn’t really get involved into trying to solve the mystery. And another small thing that bothered me is the title. There is no poison or pie in this book, so I have no idea why the title mentions a Poison Pie.

For some reason I had a hard time liking Mia. She seemed nice enough at first and I like her passion for cooking and how she cooks to de-stress. I didn’t really care for how much she still thought of her ex, but that made sense given he was such a big part of her life for so long, it just wasn’t particularly interesting. I also never got why they were together in the first place, he is painted like such an unlikable character who doesn’t fit with Mia at all, that I just couldn’t grasp how they ever had a relationship. Then there is Mia herself who could be quite rude and judgmental at times. Mostly these are small things like her inner thoughts or how she interpreted things that just rubbed me wrong. There are also some scenes where she isn’t acting smartly and she keeps secrets from both her friends and family and forgets to give important clues to the police. She also seemed to dislike the police officer, who had his own issues with Mia, but in my opinion Mia’s behavior sure didn’t make it better. She also keeps thinking she isn’t ready for a romance, which she said so often, but then didn’t act on it and never communicates that with the love interest. I didn’t really feel the romance.

I had expected this to be a paranormal cozy mystery and I loved the idea of a kitchen witch. There just isn’t a lot of paranormal at all. There is no explanation, we don’t get a feel for the paranormal element and it doesn’t come alive. I loved the idea, but we see so little of it, it was disappointing. By the end of the book I still had no clue what a kitchen witch could do or a normal witch for that matter, as those exist too. The magic doesn’t really play a role in the story and doesn’t even add much flavor as it just isn’t there for enough. Mostly it’s hinted at, Mia makes some assumptions of other people’s magic and we hear multiple times about the role kitchen witches had in previous times. I am just sad there wasn’t more about the magic.

To summarize: I really wanted to like this book, but sadly it didn’t work for me. After the promising prequel I was looking forward to this book, but unfortunately I didn’t like it. The set up was promising and I liked the idea of a kitchen witch. Unfortunately the mystery fell flat for me. There wasn’t as much focus on the mystery, the main character didn’t do much investigating, there are hardly any suspects and the ending felt anticlimactic. There are some other side plot lines beside the main mystery, but they didn’t really catch my interest either. I didn’t like Mia, she seemed nice enough at first and I liked her passion for cooking, but she could be rude and judgmental and some of her inner thoughts rubbed me wrong. I also was disappointed there isn’t more magic and paranormal. Mia is a kitchen witch, but there hardly is any information about how it works. Sadly this book didn’t work for me.