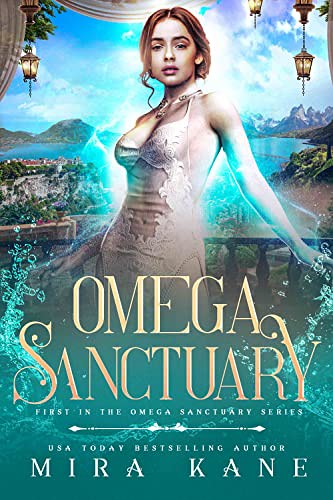 Blurb:
The Omega Sanctuary had one job, find and protect omegas.

I expected to spend my life as a simple baker and overlooked beta. After failing every test to see if I was a fabled alpha or omega, I embraced the quiet beta life.

Unfortunately, my body had other plans. Flung into a pre-heat state only omegas experience, my dreams go up in flames. Along with my sex drive.

Rushed off to the Omega Sanctuary, I have to bond an alpha before my first heat comes, and with it, uncontrollable magic. Except my scent is so subtle, the only men who will give me a second glance are forbidden.

A guardian oath-bound to the Order of the Silver Lion. A flirtatious omega, and his older and oh so much wiser alpha. A disdainful prince who is more worried about politics than pack.

With shadowy forces kidnapping omegas straight from their temples, it’s never been a more dangerous time to be an omega.

If I have any hope of protecting those I love, I’ll have to become the omega I never wanted to be to do the impossible.

Unite these men into a pack.

♥Warning: contains MM, HEA guaranteed in Book 2, but pack is not complete in Book 1

I really liked the concept and set up for Omega Sanctuary, but in the end this turned out to be a bit of a mixed read for me. There were lots of little things that didn’t quite work for me, which added up in the end. And it just left me feeling very mixed about this book.

Omega Sanctuary is an omegaverse book set in a fantasy world instead of a contemporary setting. I admittedly am pretty new to the omegaverse genre, but I liked the twist of this one being set in a fantasy setting. I wish we saw more of the world to fully make it come alive. I thought it was neat that it followed a main character who was a baker, although I would’ve liked a bit more from the baking scenes, but maybe that’s because I am used to the more detailed baking scenes you often find in cozy mysteries. The set-up was interesting with an omega who didn’t know she was an omega until it was almost too late. And how she has some special magic too.

I thought the start of this one was a bit slow. There’s also a whole set-up with a romance that doesn’t feel quite right and seeing how that panned out before it feels like the story really starts and I am still not quite sure why that part was relevant as it doesn’t have as much impact later. Then the book feels quite story focused for a bit, but then once she starts finding romantic partners it mostly turns to only romance and steam with very little plot. There also were way too much steamy scenes for my taste in the later half of the book. It felt like she didn’t do much else with her guys then land in bed.

I felt like a lot of the plot lines or plot points are set up and don’t really go anywhere or progress much. Things like the kidnapped omegas which seemed an important plot point stayed to the background and didn’t progress much despite it being mentioned often. I also would’ve liked some more character related plot lines or conflict or seeing characters develop a bit more. Some of the things just seemed a bit too easy. There are also some things that can’t happen or are a problem and then suddenly they aren’t.

I thought Zara was an okay main character, but I never fully warmed up to her. I liked how she was a baker and how she figured out she wanted someone who cared about more than just her omega status. At other times I liked her a bit less, the way she sometimes acted or behaved just didn’t quite work for me. I liked her friendship with her fellow female omega she met early in the book and wish we saw more of her later in the series. I thought there was a nice set up for a romance for her friend, but that didn’t go anywhere yet. I also wish sometimes we got a bit deeper into Zara’s head as at times I didn’t really get what she was feeling. There is some trauma she goes through, but then later in the book it doesn’t seem to be as much of an issue. I just wanted a bit of a deeper idea of what she was going through. She goes through some though stuff, but then most of the time I didn’t really felt the impact of that.

I have a bit mixed feelings about the romance. I liked the set-ups for most of them and I appreciate how she got to know most of them before falling in bed with them, but it still felt quite fast. All the romances progressed quite quickly and while they spend time together I didn’t quite feel her connection with them. There are 5 guys she gets in her pack by the end of the book and that’s a lot of romances to build in one book. I kinda liked that there were parts where not everyone was there so the focus could shift a bit from guy to guy. I did feel that once she got in bed with a guy the focus shifted and most of their time going forward was steam, a lot of it and not much else. It got kinda tiring after a while how she was always in the mood and could come lots of times. I think I liked her romance with Asano the most as they actually went on dates and got to know each other a bit more before their romance turned physical. I did like how Zara has a variety of guys and doesn’t go only for the expected and accepted ones.

I didn’t really care for the way the group came together as a pack. It felt like Zara mostly had individual relationships with every guy, except for two who were already bonded and it seemed fine that way to me. They don’t interact much and each of their romances is pretty separate. Then by the end it suddenly turns into one big group thing with everyone together and it just didn’t seem to fit with what was previously established. It felt too much too soon and too easy to suddenly have them be all one big groups and some MM that came out of nowhere. I am all for MM in polyamory romances and it felt fitting with the two who were already a couple, but in the scene at the end it just felt done for the hotness effect and not organically and that didn’t work for me.

This book had an interesting idea for the world with a fantasy world, with magic and alpha, omegas, betas and deltas. Unfortunately I felt that the world didn’t really come alive as much. There wasn’t much explanation for a lot of things, like why a omega needs to bond with a alpha or even how the magic works. I liked the unique feel it gave to the book, but I wanted more detail. The world was a bit of a weird mix of a more typical medieval fantasy setting and there being magic combined with more modern things like ovens, running water etc. There are some interesting pieces like the way the magic runs and the shrines govern the magic. I wanted to see more of the world and udnerstand why the world was the way it is. It just felt like there wasn’t enough to really make the world feel real and alive.

To summarize: I liked the set-up for Omega Sanctuary with the way it blends the omegaverse genre with a fantasy setting. It had an unique feel and I liked the set-up. It was an easy read and I wanted to keep reading, but the further I got the more little things started bothered that added up and made this a mixed read for me. There was a lot of set-up that didn’t really go anywhere and build-up that then didn’t seem as relevant. I liked how Zara was a baker and she seemed a nice enough person, but I wish we could get deeper into her head and really understand what she was feeling and going through. I liked how the romances all had a bit of build-up before things turned steamy, but to me it still felt like the relationships all progressed really quickly and most of the focus was on the steam. While the first half of the book has quite a bit of plot the later half seemed more focused on the romances and especially the steamy content. There was a bit too much steam for my taste in this book. I didn’t really care how the pack came together as a group, the romances mostly felt just Zara and the guy and the guys didn’t really interact much together except for the two who were already bonded before they got to know Zara. Then at the end there’s suddenly this big group thing and it just felt off to me. The world seemed interesting, but there wasn’t enough detail to make it really come alive. There were so many things I wanted to know more of.